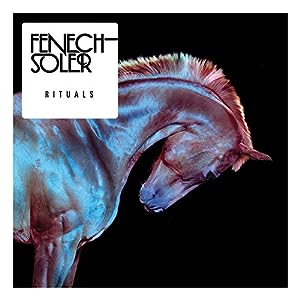 $7.95
As of 2022-09-24 20:14:22 UTC (more info)
Not Available - stock arriving soon
Buy Now from Amazon
Product prices and availability are accurate as of 2022-09-24 20:14:22 UTC and are subject to change. Any price and availability information displayed on http://www.amazon.com/ at the time of purchase will apply to the purchase of this product.
See All Product Reviews

'Rituals (Special Edition)' is the first US release from Fenech-Soler.

Fenech-Soler are brothers Ben and Ross Duffy, Dan Fenech-Soler and Andrew Lindsay. At Glastonbury 2011 Fenech-Soler were at the height of their tremendously successful debut. The band had been discovered by Daft Punk collaborator Alan Braxe, and featured on a Maison Kitsune compilation leading to their Warner Bros signing. They had sold out tours, had their singles playlisted at BBC1 and were riding the tidal wave of indie-commercial crossover success. As they looked out at the thousands of festival-goers singing along, they faced what was an uncertain and terrifying future when lead singer Ben Duffy was diagnosed with cancer. Many months and several treatments later, Duffy received a clean bill of health and the band are ready to make their mark in the US.

only $6.76
Not Available
View Add to Cart