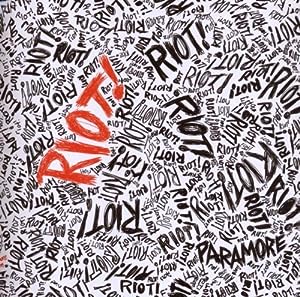 $4.93
As of 2021-12-06 12:23:36 UTC (more info)
Not Available - stock arriving soon
Buy Now from Amazon
Product prices and availability are accurate as of 2021-12-06 12:23:36 UTC and are subject to change. Any price and availability information displayed on http://www.amazon.com/ at the time of purchase will apply to the purchase of this product.
See All Product Reviews

After gaining hordes of enthusiastic fans worldwide with their debut All We Know Is Falling, Paramore is poised to breakthrough to new heights with their newest offering Riot! Their sophomore record, produced by David Bendeth (Hawthorne Heights, Red Jumpsuit Apparatus) is due in stores everywhere June 12th. Lead single Misery Business, in addition to other album tracks, deals with issues of shame and self-discovery as lead-singer Hayley Williams discusses. I've been ashamed, she says. I've felt hate, jealously, lust, fear, pride, self-consciousness... You hear a lot of this on the record. I feel like I need to talk about it. It is not uncommon for Paramore to expose their emotions and allow fans to have such an intimate look into their lives. While recording the track Born For This, the band invited a handful of fans into the studio to sing back-up vocals on the song. Fans have responded by voting Paramore as the #1 Best New Band in Kerrang! magazine, beating out Panic! at the Disco among others, and Alternative Press magazine has named Riot! as one of their most anticipated releases of 2007. Brothers Josh and Zac Farro (on guitar and drums respectively), as well as Jeremy Davis (on bass), round out the enthusiastic Franklin, TN based quartet. This year finds the band bringing their energetic live show to fans in cities worldwide. This spring the band will embark on a 20+ date sold-out headlining club tour, including the now-legendary Bamboozle festival. Following a stint on the European club circuit, the band will return to the States this summer with a coveted main stage slot on the Vans Warped Tour.

Ah, youth: the exuberance, the energy, the blistering highs and bottomless depths. It’s an ideal breeding ground for true rock & roll belief. Hence, the youngsters of Paramore unearth geysers of loud, sugary angst on Riot!, their major label debut and follow-up to 2005’s All We Know Is Falling. Small-town musicians who have played together for years, Paramore boasts the appeal of an emo-pop blast developed out of savvy songwriting and musicianship. The sweet spot the band hits--somewhere between Avril Lavigne and All-American Rejects--comes naturally. Lead singer Hayley Williams, barely 18, has big-time vocal depth and genuine charisma besides, and while her singing can sound a little contrived, she delivers with such end-of-the-world conviction that it’s an easy flaw to forgive. Bright and catchy melodies abound, but songs like "Misery Business" and "Miracle" also feature razor-sharp cadences and ultra-clean transitions. Too clean, actually. The production is crystal clear, which accentuates the stumbles (mostly on the ballads) and robs these whippersnappers of the messy highs they surely achieve playing live. But some things can’t be entirely glossed over, and while the more aged among us will sip our Scotch and make fun of their adolescent shenanigans, we’ll also be surreptitiously listening on our iPods after we put the kids to bed. --Matthew Cooke

Hymns That Are Important to Us