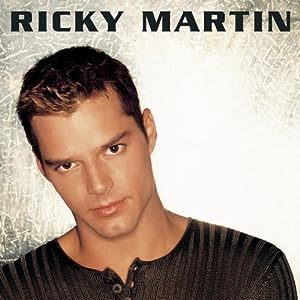 $0.59
As of 2021-04-22 13:39:28 UTC (more info)
Not Available - stock arriving soon
Buy Now from Amazon
Product prices and availability are accurate as of 2021-04-22 13:39:28 UTC and are subject to change. Any price and availability information displayed on http://www.amazon.com/ at the time of purchase will apply to the purchase of this product.
See All Product Reviews

Puerto Rican superstar Ricky Martin's self-titled first English-language album is a triumph of an omnivorous world-pop sensibility--but more important is that at its best, it's a real kick. The first single, "Livin' la Vida Loca," employs a revved-up ska tempo to praise a girl whose "lips are devil red [and] skin's the color of mocha." Martin is no less irresistible on the disc's other uptempo numbers, such as "Spanish Eyes," "The Cup of Life" (the 1998 World Cup theme which with he stole the Grammy telecast a few months before this CD's release), and the Soul Coughing-indebted "Shake Your Bon Bon." Ricky Martin loses momentum with its draggier ballads--even the much-touted Madonna duet, "Be Careful (Cuidade con Mi Corazon)," doesn't spark--but overall, it deserves its inevitable multiplatinum success. --Rickey Wright

only $6.60
Not Available
View Add to Cart

only $7.26
Not Available
View Add to Cart