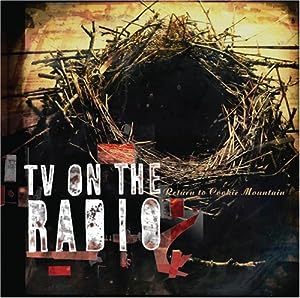 $9.94
As of 2022-09-16 22:36:52 UTC (more info)
Not Available - stock arriving soon
Buy Now from Amazon
Product prices and availability are accurate as of 2022-09-16 22:36:52 UTC and are subject to change. Any price and availability information displayed on http://www.amazon.com/ at the time of purchase will apply to the purchase of this product.
See All Product Reviews

Since 2001, TV on the Radio have been mixing postpunk, electronic and other atmospheric elements in such a creative way that it only seems fitting that it's core duo, Tunde Adebimpe and David Andrew Sitek, are both visual artists as well as musicians. For example, Tunde is a graduate of NYU's film school and specializes in stop motion animation. The duo met when Sitek moved into the building where Tunde had a loft; each of them had been recording music on their own. They soon realized that their sounds would work well together which resulted in a self-titled, 24-track CD released by the Brooklyn Milk imprint. TV on the Radio then added guitarist/vocalist Kyp Malone to their fold. The band has now returned with 'Return to Cookie Mountain,' a more polished but still soul-searching collection of songs. The Interscope release is set for September 12, and its' atmospheric blend of soul, experimental, and avant-garde rock is sure to open the minds and ears of those who listen.

Their second album and first for Interscope is almost wholly brilliant. Like Mogwai, Sigur Ros and a dozen others, TVOTR excels at making slowly-evolving tunes with vaguely anthemic choruses and lots of loud-soft dynamics. Unlike virtually any of those other bands, TV on the Radio mix a genuine and actual songwriting ability with their knack for finding sounds that appear to be "new." This record is crisper-sounding and incorporates more dance-based elements, but it's essentially a pop album. While the lack of the free web-released "Dry Drunk Emperor, a tribute to President Bush, is initially a bummer, the album percolates with enough pre-apocalyptic tension to satisfy anyone. In a Prince-pitched falsetto, the group sings "I was a lover/ Before this war," While throughout, the combination of melody and invention is always pitch-perfect (well, except on "Province" and "Let the Devil In," those songs sort of suck.) People of Earth: please make this band into total superstars and buy several copies of their album: one for the car, another for the office, etc. What we really need in our popular music is more weirdness, and more truth. --Mike McGonigal