Ready For This? (CD/DVD) 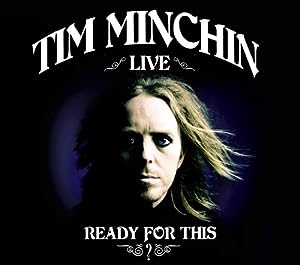 Ready For This? (CD/DVD)

Tim Minchin is an Australian musician, composer, songwriter, actor, comedian and writer. In 2002, he began to develop the solo comedy shows which have gained him public and critical acclaim. Tim has also written the music and lyrics for Matilda The Musical for the Royal Shakespeare Company: an adaptation of the Roald Dahl children s story. The show previewed in November 2010 in Stratford-upon-Avon. The musical transfers to the Cambridge Theatre in London s West End on October 18th 2011.
Tim appeared at the Montreal Just For Laughs Festival in 2006 and the HBO US Comedy Arts Festival in January 2007, where he won the award for Best Alternative Comedian. In November that year, he performed at the HBO Comedy Festival in Las Vegas and sold out shows in both New York and Los Angeles. He returned to the Just For Laughs Festival in 2010.
In Australia, he has performed sellout shows at the Sydney Opera House, the Brisbane Powerhouse and His Majesty s Theatre in Perth, and has performed at the Adelaide Fringe, the Adelaide Cabaret Festival, the Melbourne International Comedy Festival and the Big Laugh Festival in Sydney. He has become a favorite at various UK festivals including Latitude, The Big Chill, Reading and Leeds. He performed at Camp Bestival, Hay and Sonosphere in 2010.
Tim s show Ready For This? toured the UK, Australia and New Zealand to sell-out audiences in 2009 and 2010. Tim s celebrated 9-minute beat poem,
Storm, has been animated and premièred at TAM London in October 2010. The animated movie was made available to all, on YouTube, in 2011, following some film festival screenings and is included as a bonus video on the DVD for Ready For This?
Tim embarked on his first Arena tour of the UK, in December 2010, including a performance at the O2, London. He then took the show to Australia, in early 2011, performing to packed houses with the state symphony orchestras all over the country, including four sold out dates at the Sydney Opera House. Ready for This? is Tim s first U.S release, coming off the heels of a sold out North American run of shows of Ready for This? this past June July 2011.
The filming for the DVD Ready For This? took place at the HMV Hammersmith Apollo, London. The audio for the bonus CD Ready For This? was recorded with a band & string quartet at the Queen Elizabeth Hall, London.

Go Tell It on the Mountain