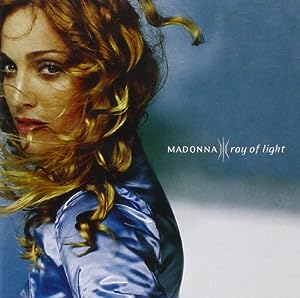 $4.99
As of 2022-11-27 18:42:17 UTC (more info)
Not Available - stock arriving soon
Buy Now from Amazon
Product prices and availability are accurate as of 2022-11-27 18:42:17 UTC and are subject to change. Any price and availability information displayed on http://www.amazon.com/ at the time of purchase will apply to the purchase of this product.
See All Product Reviews

Never underestimate Madonna's power of persuasion: By nearly all critical accounts, Ray of Light, Madonna's first album of new material since 1994's Bedtime Stories, and her first since motherhood, is her richest, most accomplished record yet. While Ray of Light is being tagged as Madonna's big leap into electronica, it's important to note two things: First, her music has always had close ties to dance culture, and, second, her collaborator William Orbit is no Chemical Brother. Though it has all the latest blips, bleeps, and crackles electronica has to offer, Ray of Light is still largely an adult album, completely within Madonna's realm. Still, Orbit's tasteful sonic constructions provide Madonna with her most adventurous, hippest musical backdrop ever. What's more, the arrangements and production are understated enough to highlight an even bigger development: Fresh from singing lessons on the Evita set, Madonna's vocal range, depth, and clarity have never been stronger. But larger pipes don't necessarily make for deeper, truer music. Never a master lyricist, Madonna's words have worked best when they've practically been slogans ("Vogue," "Express Yourself"). This time she goes for more emotional depth, and even tries her hand at ethno-techno-mysticism ("Shanti/Ashtangi"). She largely stumbles, however. The tone conveyed on songs like "Nothing Really Matters" is a self-centered pat on the back that belies her claim to a newfound altruism. It's enough to make you wonder, now that Madonna's given up being our material girl, if maybe she's set her sights on becoming the center of our spiritual world too. --Roni Sarig

only $7.87
Not Available
View Add to Cart