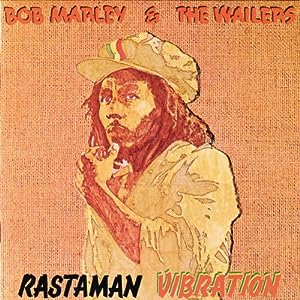 $24.00
As of 2022-09-19 05:17:13 UTC (more info)
Not Available - stock arriving soon
Buy Now from Amazon
Product prices and availability are accurate as of 2022-09-19 05:17:13 UTC and are subject to change. Any price and availability information displayed on http://www.amazon.com/ at the time of purchase will apply to the purchase of this product.
See All Product Reviews

Although reggae had hit the U.S. singles charts several times via covers of the Bob Marley tunes "I Shot the Sheriff" and "Stir It Up" (by Eric Clapton and Johnny Nash, respectively), the music never made the dent on American culture (and album charts) that music critics had predicted. For some reason, Rastaman Vibration proved to be Marley's breakthrough album in America. Not that the album was any better than the ones that had come before it; in fact, Live!, its immediate predecessor, is an excellent introduction to Marley's magic. This album found Marley and his Wailers experimenting a bit more with both the music (listen to the synthesizer on "Who the Cap Fit") and the polyrhythms. "War," "Rat Race," "Positive Vibrations," and the beautiful "Johnny Was" (which is, essentially, pure soul music) all became Marley staples. Ironically, a year late, punk bands would be making efforts to help this music break through even more to rock audiences. --Bill Holdship