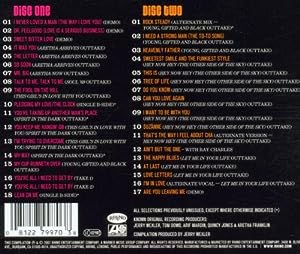 $7.24
As of 2023-01-24 21:07:12 UTC (more info)
Not Available - stock arriving soon
Buy Now from Amazon
Product prices and availability are accurate as of 2023-01-24 21:07:12 UTC and are subject to change. Any price and availability information displayed on http://www.amazon.com/ at the time of purchase will apply to the purchase of this product.
See All Product Reviews

Nearly every music legend leaves behind a slew of unreleased songs, alternate takes of released tunes, and live and demo material. To collectors, such detritus from the Beatles, the Rolling Stones, Bob Dylan, and others is manna from heaven. Aretha Franklin's first six years with Atlantic Records generated its own sheaf of unreleased songs and rarities, lovingly compiled into a chronological two-CD collection. Raw 1966 demos of her first Atlantic hit "I Never Loved a Man (The Way I Love You)" and "Dr. Feelgood" from her debut album open the gates to an embarrassment of riches from 1967 to 1973, most eventually recorded for other albums. The explosive, gospel-flavored "The Letter" and "It Was You," recorded during the Aretha Arrives sessions, are masterpieces, as is her extraordinary spin on the Beatles' "The Fool on the Hill," given to Franklin by Paul McCartney and released on Magical Mystery Tour only after her version never appeared. Her soulful take on "My Cup Runneth Over" renders Ed Ames's syrupy '60s-pop version irrelevant and it's difficult to see why the down-and-dirty blues "Do You Know" from her Other Side of the Sky sessions never appeared. A live duet with Ray Charles on Duke Ellington's "Ain't But the One" from a 1973 Ellington salute on CBS is followed by an eloquent takes on Etta James's hit "At Last" and Nat King Cole's "Love Letters." With knowing, poignant reminiscences from Atlantic's legendary Jerry Wexler, Franklin's producer during these years, it's an overdue, eminently fulfilling journey beyond her classics. --Rich Kienzle