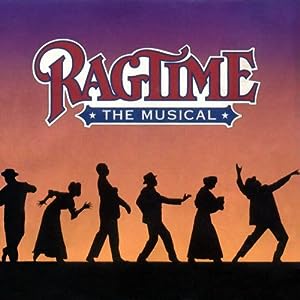 $13.50
As of 2022-11-23 11:59:55 UTC (more info)
Not Available - stock arriving soon
Buy Now from Amazon
Product prices and availability are accurate as of 2022-11-23 11:59:55 UTC and are subject to change. Any price and availability information displayed on http://www.amazon.com/ at the time of purchase will apply to the purchase of this product.
See All Product Reviews

The epic sweep of Ragtime is captured in its opening prologue, a nine-minute kaleidoscope of fictional characters mingling with historical figures from the early 20th century as originally captured in E.L. Doctorow's sprawling novel. As the story continues, we meet pianist Coalhouse Walker Jr. (Brian Stokes Mitchell) and his child's mother, Sarah (Audra McDonald), who has been taken in by a respectable family (including Marin Mazzie as Mother). Parallel story lines of the Latvian immigrant Tateh (Peter Friedman), the entertainer Evelyn Nesbit (Lynnette Perry), and even Harry Houdini (Jim Corti) and Emma Goldman (Judy Kaye) eventually mingle and merge. Stephen Flaherty and Lynn Ahrens (Once on This Island) mix marches, cakewalks, and of course ragtime to create a rich, compelling score, including Sarah's song to her baby, "Your Daddy's Son," her soaring duet with Coalhouse, "Wheels of a Dream," Mother's self-revealing "Back to Before," and numerous set pieces, all performed by a perfect cast. Ragtime was nominated for 12 Tony Awards in 1998, with wins for McDonald, original score, book, and orchestration. The CD also includes an eight-minute symphonic suite conducted by Paul Gemignani and a booklet with photos, full lyrics, and a history of how the score was written. Tragic, touching, and ultimately triumphant, Ragtime is an American classic. --David Horiuchi

Charles Rosen - The Complete Columbia an...