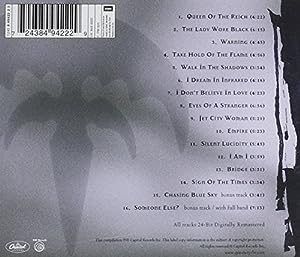 $5.89
As of 2020-04-01 02:52:17 UTC (more info)
Not Available - stock arriving soon
Buy Now from Amazon
Product prices and availability are accurate as of 2020-04-01 02:52:17 UTC and are subject to change. Any price and availability information displayed on http://www.amazon.com/ at the time of purchase will apply to the purchase of this product.
See All Product Reviews

Here's the first ever hits compilation from one of the most distinctive bands of the 80s! Tracks include "Silent Lucidity," "Empire," "Jet City Woman" and more - with two bonus tracks and, for a limited time the Promised Land CD-ROM game.

It doesn't take very many fingers to enumerate the number of American heavy-metal bands who traversed the treacherously shifting musical tastes of the 1980s and '90s intact and prosperous. And though their multiplatinum days peaked well before contemporaries like Metallica, Queensryche soldiered on, their sound evolving and maturing in remarkably similar fashion; one might argue they lead the way in that regard. Greatest-hits collections are suspect affairs, but this one presents a taut history lesson, documenting the evolution of one of America's most consistently underrated metal outfits from the Judas Priest-clone days of their self-released debut to the heights of Operation: Mindcrime and Empire, and into their equally rewarding '90s output. Along the way, the band managed to pick up an often artsy social conscience as well as an impressive musical range (the quiet dynamics of "Silent Lucidity" being light-years away from singer Geoff Tate's original Halford-esque howl) and a catchy pop sensibility ("Jet City Woman," "Sign of the Times"). Fans will also welcome two bonus tracks, the bluesy "Chasing Blue Sky" and an alternate, full-band version of "Someone Else?" --Jerry McCulley

Tell The World: The Very Best Of Ratt