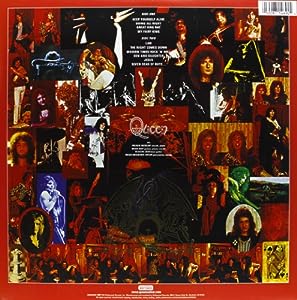 $15.26
As of 2022-09-27 18:54:14 UTC (more info)
Not Available - stock arriving soon
Buy Now from Amazon
Product prices and availability are accurate as of 2022-09-27 18:54:14 UTC and are subject to change. Any price and availability information displayed on http://www.amazon.com/ at the time of purchase will apply to the purchase of this product.
See All Product Reviews

Heavy, arty, glam - the debut album from Queen burst from the womb in 1973 and established them with their first two hits Keep Yourself Alive and Liar . This edition reproduces the rare U.S. original vinyl release, including the gold leaf logo. A platinum smash in its original and CD releases, now restored to glorious analog 180 gram jet-black vinyl lp Yes it's Phase II of Queen on Vinyl Collector's Edition re-issue program - every Queen studio album is to be released on vinyl lps over the next two years. The original albums are being re-issued correct in every detail to the original releases, including inner sleeves, packaging and bonuses.

Above The Clouds: The Very Best Of Glenn...