Queen: The Making of A Night at the Opera 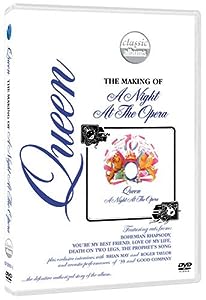 Queen: The Making of A Night at the Opera

$7.98
As of 2022-09-24 19:58:38 UTC (more info)
Not Available - stock arriving soon
Buy Now from Amazon
Product prices and availability are accurate as of 2022-09-24 19:58:38 UTC and are subject to change. Any price and availability information displayed on http://www.amazon.com/ at the time of purchase will apply to the purchase of this product.
See All Product Reviews

If ever there was an album worthy of inclusion in Eagle Vision’s Classic Albums series it is Queen’s breakout release A Night At The Opera. Released in 1975, this was not only the band’s first platinum album, but also the one that catapulted them into the spotlight as one of the biggest rock acts in the world.

Now for the first time, fans are offered an in-depth look at one of rock music’s seminal records with the Classic Albums DVD Queen — The Making Of A Night At The Opera.

• BRAND NEW INTERVIEWS with guitarist Brian May and drummer Roger Taylor.
• COMMENTARY by original producer Roy Thomas Baker.
• ARCHIVAL PERFORMANCE and INTERVIEW FOOTAGE with late lead singer Freddie Mercury.
• INTERVIEWS and GUEST COMMENTARY by guitarists Joe Perry (Aerosmith), Nuno Bettencourt (Extreme), Ian Hunter (Mott The Hoople) and many more.
• NEW ACOUSTIC PERFORMANCES of ’39 and Love Of My Life by Brian May.
• DRUM and ACOUSTIC DEMONSTRATIONS of I ’m In Love With My Car from Roger Taylor.
• ANALYSIS OF THE RECORDING PROCESS of all12 tracks on the album.

only $5.34
Not Available
View Add to Cart