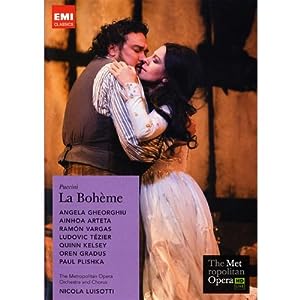 $13.24
As of 2022-12-03 14:30:31 UTC (more info)
Not Available - stock arriving soon
Buy Now from Amazon
Product prices and availability are accurate as of 2022-12-03 14:30:31 UTC and are subject to change. Any price and availability information displayed on http://www.amazon.com/ at the time of purchase will apply to the purchase of this product.
See All Product Reviews

The Metropolitan Opera's acclaimed Live in High-Definition series, which projects live performances into theaters across the globe, has met with unprecedented critical and commercial success and has made opera convenient and affordable to millions of viewers worldwide. Now, EMI Classics is proud to collaborate with The Met to release 6 new DVDs made from these broadcast performances.

Puccini's immortal classic of love and loss, with Franco Zeffirelli's sumptuous, iconic production and Nicola Luisotti's expressive conducting. Angela Gheorghiu, the leading Puccini soprano of our time, reprises the role of Mimì, while tenor Ramón Vargas gives a sensitive reading of Rodolfo. All these forces combine for a truly definitive performance of this beloved opera!

Franco Zeffirelli’s production of La Bohème is a perennial favorite at New York’s Metropolitan Opera and it retains its power in this 2008 performance. Its large-scale settings and especially an Act II set that looks as if half the 1890’s Paris Latin Quarter has been beamed direct to the MET. It’s been criticized as an over-the-top spectacle, but as well as bringing breath-taking realism to the stage, it’s bursting with energy and directorial flair. The individuals making up the large crowds milling in front of the Café Momus each have some little stage business to do, giving the audience the feeling of participating in the onstage street festival. Zeffirelli’s detailed directing even extends to the snow-filled Act III, where shadowy figures walk across the background hill in the distance while the principals are up front. While Zeffirelli’s conception tends to scant the opera’s intimate scenes in the theatre, on DVD those scenes make heightened impact. TV director Gary Halvorson’s establishing shots show a cutaway of the bohemians’ little garret precariously poised atop a sharply raked house, but he soon cuts to closeups of the playing space and the singers, creating a sense of warm interplay of personalities unavailable to the theatre audience.

The MET provides a luxurious cast to complement the sumptuous setting. Tenor Ramón Vargas is an excellent Rodolfo, singing with passion, imaginative phrasing, and coloring his beautiful lyric voice to fit the text. Mimi is Angela Gheorghiu, always a stellar singing actress. Here she sings with a sensitivity to match her Rodolfo, exquisitely coloring her voice, as in her Mi chiamano Mimi, where she thins her voice at the start and then opens it out to bloom when she sings of the approach of spring. As an actress, she’s best after the first Act, when she abandons the coy, girlish tics that seem out of place. In the last Act, she’s profoundly moving in the death scene, as is Vargas, who is touching in his portrayal of Rodolfo’s desperation and sense of loss. Baritone Ludovic Tézier’s Marcello is well sung, as is soprano Ainhoa Arteta’s Musetta, the latter delivering a sparkling Quando me’n vo’ in the Café Momus scene. Rodolfo’s pals, Oren Gradus as Colline and Quinn Kelsey as Schaunard, are excellent, and veteran bass Paul Plishka contributes some nice comic turns as Benoit and Alcindoro. --Dan Davis

La Bohème is an all-regions disc in 16:9 ratio. Sound options include PCM Stereo and DTS 5.1 Surround. Sung in Italian, subtitles include English, French, German, Italian and Spanish. Extras include backstage interviews by Renée Fleming and a short tribute, "Zeffirelli at the Met."

Mahler: Symphony No. 3 in D Minor