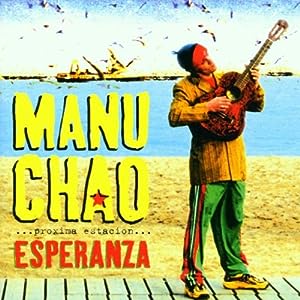 $7.15
As of 2021-04-15 19:11:53 UTC (more info)
Not Available - stock arriving soon
Buy Now from Amazon
Product prices and availability are accurate as of 2021-04-15 19:11:53 UTC and are subject to change. Any price and availability information displayed on http://www.amazon.com/ at the time of purchase will apply to the purchase of this product.
See All Product Reviews

Sophomore solo album from Manu Chao, the former leader of French Alt rockers Mano Negra. Though Mano Negra experienced some success while together, Manu Chao's solo career has earned him an international audience of music lovers and critics. Originally released in 2001, Chao extends his musical reach and adds a heavier Caribbean flavor than his debut album, Clandestino. 17 tracks including 'Merry Blues', 'Eldorado 1997', 'Me Gustas Tu' and more. Because

The debut from Manu Chao, the former leader of French world-punks Lo Mano Negra, leaned heavily on Latin America for its inspiration, but this time around he's obviously been spending time--at least in his head--in the Caribbean. Reggae rhythms abound, and the opener "Merry Blues" features some wonderfully wonky Jamaican-style brass, while "Promiscuity" takes its cue from Trinidadian calypso. Of course, this being Chao, there are plenty of playful touches--from ringing cell phones to speeded-up vocals--and inevitably there are the Latin influences throughout to remind you of what remains close to his heart ("La Primavera" in particular is a standout). But there's also some recycling from the last album, with two pieces sharing the "King of Bongo" melody, including "Mr. Bobby," his tribute to Bob Marley, and that's a little worrying. Is Manu Chao running out of inspiration? Certainly this doesn't have the freshness of Clandestino, however enjoyable it may be. If anything, it seems more of a holding action rather than a giant step forward. But sometimes that's necessary to be able to look to the future. --Chris Nickson