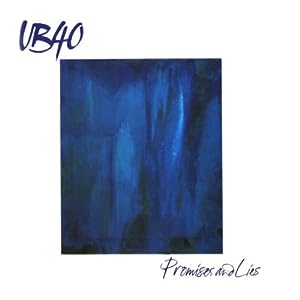 $2.98
As of 2021-07-04 09:24:03 UTC (more info)
Not Available - stock arriving soon
Buy Now from Amazon
Product prices and availability are accurate as of 2021-07-04 09:24:03 UTC and are subject to change. Any price and availability information displayed on http://www.amazon.com/ at the time of purchase will apply to the purchase of this product.
See All Product Reviews

Promises And Lies by UB40

It's no coincidence that UB40's biggest hits and most pleasurable songs have been their reggae-rock remakes of other acts' songs--Neil Diamond's "Red Red Wine," Sonny and Cher's "I Got You Babe," the Chi- Lites' "Homely Girl," Bob Dylan's "I'll Be Your Baby Tonight," and so on. Only 1 of the 11 numbers on Promises and Lies is a cover tune, but the band's remake of Elvis Presley's "Can't Help Falling in Love" is a real treat. Featured in the film Sliver, the ballad gets a new momentum from UB40's horns and rhythm section and finds its obsessive quality reinforced by the reggae-dub echoes. The album also includes "Reggae Music," a delightful dancehall workout which neatly balances Astro's reggae toasting against Ali and Robin Campbell's sweetly sung pop-soul hook. Unfortunately, the other 9 songs are full of steady grooves and admirable sentiments but little in the way of melody or fresh ideas that might separate them from hundreds of similar reggae exercises. --Geoffrey Himes