Prince of Darkness from Sony 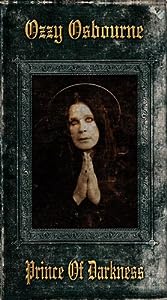 Prince of Darkness from Sony

$33.35
As of 2023-01-25 15:18:54 UTC (more info)
Not Available - stock arriving soon
Buy Now from Amazon
Product prices and availability are accurate as of 2023-01-25 15:18:54 UTC and are subject to change. Any price and availability information displayed on http://www.amazon.com/ at the time of purchase will apply to the purchase of this product.
See All Product Reviews

Description of Prince of Darkness from Sony

We are delighted to stock the famous Prince of Darkness.

With so many on offer recently, it is great to have a brand you can trust. The Prince of Darkness is certainly that and will be a great acquisition.

For this great price, the Prince of Darkness comes widely recommended and is a regular choice with lots of people. Sony have added some nice touches and this means great value for money.

From Blizzard to Budokan, this is the most extensive and revealing collection marking the incredible career of one of rock's living legends. 50 tracks with 15 previously unreleased tracks including 10 newly recorded covers of some of Ozzy's favorite and most influential songs. Also includes 13 collaborations between Ozzy and artists ranging from Motorhead and Black Sabbath to DMX and Wu-Tang! Special deluxe packaging includes a 60 page full color book with rare photos, memorabilia plus liner notes and track by track annotation written by Ozzy himself! Epic. 2005.

Not entirely a career retrospective and decidedly not a vault raid that reveals the junk in the trunk, this four-disc collection chronicles Ozzy’s hot-burnt and all-too-brief Blizzard Of Ozz and Diary Of A Madman post-Black Sabbath era with Randy Rhoads and also the long road the Ozzman traveled in search of a guitarist that could ever come close to matching his late friend’s creative spark. Listening to material from albums such as Bark At The Moon and The Ultimate Sin reveals that even when Osbourne wasn’t flying all that high musically he did keep evolving and, in the often risk averse world of heavy metal, he often took chances that could have potentially alienated core fans ("Thank God For The Bomb" reveals that Ozzy may care about the planet but he doesn’t possess the same knack for politics as Bob Dylan) but made them embrace him even more. He managed to hit another career high with guitarist Zakk Wylde and the No More Tears album which provides some of the second disc’s finest moments. ("Mama I’m Coming Home" proves one of the underrated balladeer’s most poignant moments.) But the back end of this collection shines as much as its front with a disc that compiles various collaborative efforts, including a tussle with Miss Piggy on "Born To Be Wild" and a strange detour with Was (Not Was) on "Shake Your Head (Let’s Go To Bed)." The real gem is the fourth platter which finds Ozzy covering some of his favorite tunes from the past, including a moving and wholly accurate reading of John Lennon’s "Working Class Hero," a song that almost seems to have been written with Osbourne in mind. Ozzy may be the prince of darkness but he’s also the king of heavy metal and this set demonstrates, once more, exactly why. -- Jedd Beaudoin