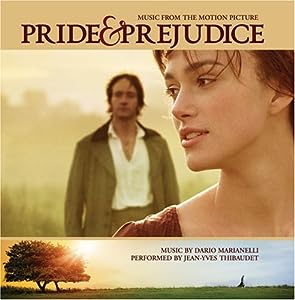 $13.93
As of 2022-11-30 06:05:00 UTC (more info)
Not Available - stock arriving soon
Buy Now from Amazon
Product prices and availability are accurate as of 2022-11-30 06:05:00 UTC and are subject to change. Any price and availability information displayed on http://www.amazon.com/ at the time of purchase will apply to the purchase of this product.
See All Product Reviews

The year 2005 was big for Italian composer Dario Marianelli. His score for The Brothers Grimm received much applause (probably more than the film itself) and a few months later he came back with another batch of compositions for a period film. This time around, the plaudits are reversed: The film is better than the score. And that's not the only reversal: Since several of his compositions were to be performed by some of the characters on screen, Marianelli wrote parts of the music before the movie was shot, switching the order in which these things are usually done. The onscreen pieces are for solo piano, and Marianelli got a huge leg up by having them played by famed classical performer Jean-Yves Thibaudet. Marianelli was instructed by director Joe Wright to think along the lines of Beethoven (tall order!) but unlike The Brothers Grimm, which cleverly mixed and matched its classical influences, Pride & Prejudice fails to acquire a personality of its own. A few tracks, such as "Arrival at Netherfield," even border on George Winston territory. The intervention of the English Chamber Orchestra usually helps, but overall the score's palette sticks too much to a monochromatic beige. --Elisabeth Vincentelli

Star Wars: The Empire Strikes Back

only $6.74
Not Available
View Add to Cart