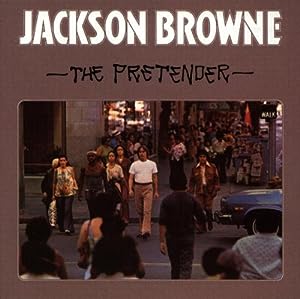 $6.97
As of 2022-12-01 13:20:18 UTC (more info)
Not Available - stock arriving soon
Buy Now from Amazon
Product prices and availability are accurate as of 2022-12-01 13:20:18 UTC and are subject to change. Any price and availability information displayed on http://www.amazon.com/ at the time of purchase will apply to the purchase of this product.
See All Product Reviews

A songwriting prodigy since his teens, Jackson Browne had already reached a zenith in confessional writing with 1974's Late for the Sky, a song cycle of his guitar and piano based anthems, reveries, and rockers, distilling themes of disillusionment, apocalypse, friendship, and fragile romances. Teaming with Bruce Springsteen's producer, Jon Landau, Browne himself clearly sought to up the ante with more epic settings, while Landau worked on pumping up the star's vocal attack. But personal tragedy, in the suicide of his partner and mother of his young son, cast an unplanned shadow across these songs, giving The Pretender a darker, heartbroken edge and an authentic, scarred toughness. Fatherhood, mortality, and resignation inform brilliant songs like "Your Bright Baby Blues" (featuring Lowell George's plangent slide guitar and vocal counterpoint), "Here Come Those Tears Again" (with Bonnie Raitt), and the prayerful, desolate "Sleep's Dark and Silent Gate," but it's the title tune that remains the haunting highlight. --Sam Sutherland

The Sherman Holmes Project: The Richmond...

I Have a Dream

The Best of George Harrison