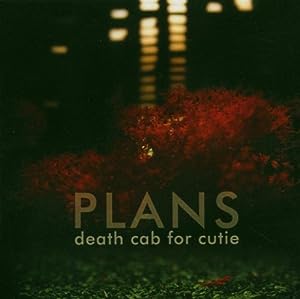 $5.02
As of 2021-07-11 18:39:17 UTC (more info)
Not Available - stock arriving soon
Buy Now from Amazon
Product prices and availability are accurate as of 2021-07-11 18:39:17 UTC and are subject to change. Any price and availability information displayed on http://www.amazon.com/ at the time of purchase will apply to the purchase of this product.
See All Product Reviews

Can your heart take this? Are you ready? Plans marks Death Cab for Cutie's major label debut. 11-tracks of pure indie pop that will further prove that Ben Gibbard and crew just can't do wrong. Atlantic. 2005.

When an indie-rock band as intimately and fiercely loved as Death Cab for Cutie makes the inevitable major-label jump, it often telegraphs a painful death. Witness Husker Du, the Replacements, Nirvana--hell, even R.E.M. After a successful four-album run on tiny Seattle imprint Barsuk, however, Death Cab for Cutie just might buck the trend on its Atlantic premiere. Yes, you can grumble about the production (a little too slick), the proportion of ballads (a little too many) and the overall feeling of restraint (a little too much), but ultimately the album delivers everything the group does best in emotional, experimental songs such as "What Sarah Said" and "I Will Follow You into the Dark," which both blend stark lyrical details with acoustic guitars and soft-focus electronics. In "Soul Meets Body," meanwhile, songwriter Ben Gibbard has come up with the kind of blissful, beatific pop song that's capable of disarming even the harshest skeptic. "A melody softly soaring through my atmosphere," he sings. --Aidin Vaziri

Catching up with Death Cab for Cutie

Everybody Else is Doing It So Why Can't ...

Some Nights from Fueled By Ramen