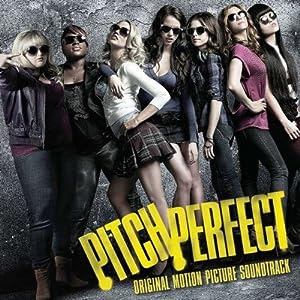 $5.82
As of 2023-01-25 03:24:05 UTC (more info)
Not Available - stock arriving soon
Buy Now from Amazon
Product prices and availability are accurate as of 2023-01-25 03:24:05 UTC and are subject to change. Any price and availability information displayed on http://www.amazon.com/ at the time of purchase will apply to the purchase of this product.
See All Product Reviews

We are proud to offer the brilliant Pitch Perfect (OST).

With so many on offer recently, it is good to have a make you can trust. The Pitch Perfect (OST) is certainly that and will be a great acquisition.

For this great price, the Pitch Perfect (OST) comes widely respected and is a popular choice with many people. UMe have provided some excellent touches and this means great value for money.

Universal Music Enterprises is proud to announce the soundtrack album of exclusive a cappella mash-ups and medleys from Universal Pictures' Pitch Perfect, a musical comedy about the cutthroat world of college music competitions.

"We wanted to remain current as well as bring back some classic songs that might not have been heard in a while," explains Julianne Jordan, one of the soundtrack producers and one of the film's executive music producers. "It's a pretty eclectic mix, with several different genres and time periods represented. The mash-ups take the movie to another level."

"We only used songs that creatively work a cappella," says soundtrack producer and the film's other executive music producer Julia Michels. "There were no instruments involved at all."

The film's original medleys include "Ladies of the 80s" (Toni Basil's "Mickey," Madonna's "Like a Virgin" and Pat Benatar's "Hit Me With Your Best Shot") and "Songs About Sex" (Rihanna's "S&M," Salt N' Pepa's "Let s Talk About Sex," Boyz II Men's "I ll Make Love to You," Foreigner's "Feels Like the First Time" and Blackstreet's "No Diggity"). Roc Nation singer/songwriter/co-star Ester Dean (Rihanna, Katy Perry, Nicki Minaj, Beyoncé, Mary J. Blige, R. Kelly, Britney Spears, Lil Wayne) and co-star Skylar Astin join together for a newly arranged soundtrack version of Kelly Clarkson's "Since U Been Gone," while star Anna Kendrick does a solo turn on the Internet viral sensation "Cups," originally performed by J. E. Mountaineers and Lulu and the Lampshades. There are also covers by the Treblemakers of Rihanna's "Don t Stop the Music" and The Dazz Band's "Let It Whip," while promising new artist My Name Is Kay is a featured performer on a cover of Flo Rida's "Right Round."

Broadway - The Golden Age, by the Legend...

only $2.78
Not Available
View Add to Cart