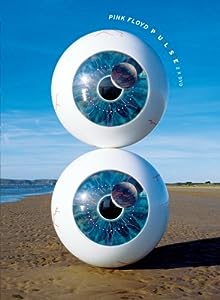 $17.98
As of 2021-07-18 09:34:42 UTC (more info)
Not Available - stock arriving soon
Buy Now from Amazon
Product prices and availability are accurate as of 2021-07-18 09:34:42 UTC and are subject to change. Any price and availability information displayed on http://www.amazon.com/ at the time of purchase will apply to the purchase of this product.
See All Product Reviews

This landmark DVD features the first ever film of Pink Floyd playing the band's seminal album, The Dark Side of the Moon, live in concert. The set documents the 1994 Division Bell tour and was filmed at London's Earls Court during a record-breaking 14-night residency. The two-disc release contains the full concert performance with rare backstage footage and previously unseen extras making the collection a must-have for Pink Floyd fans. Disc 2 features a live filmed performance of Pink Floyd--David Gilmour, Nick Mason and Rick Wright--performing the group's towering masterpiece, The Dark Side of the Moon, in its glorious entirety during the second half of the Division Bell concert. Included on disc 1 are "Shine on You Crazy Diamond," "Another Brick in the Wall (Part 2)," "High Hopes," and "Learning to Fly" as well as never-before-seen rarities such as Bootlegging the Bootleggers and exclusive behind-the-scenes footage of life on the road with one of the world's biggest and most influential rock bands. Mixed in mind-expanding 5.1 surround sound and digitally re-mastered by James Guthrie, the Pulse DVD includes some of original screen films used for the 1970s concert performances of The Dark Side of the Moon (which were never filmed) as well as the visual components for the piece which were remade for the 1994 tour.

At long last Pink Floyd: Pulse has arrived on DVD, and Floyd fans already know it's a major cause to celebrate. The original VHS release was a milestone bestseller, but it seemed to take forever for the DVD to arrive, with numerous delays while Floyd guitarist David Gilmour and long-time Floyd producer James Guthrie labored to restore, re-edit, and remix this legendary concert video in 5.1-channel Dolby Surround Sound. The resulting two-disc set was well worth the wait: While the limitations of the original video source are still evident in the sometimes-hazy image quality (Gilmour would later admit the concert should have been captured on film), Floyd fans will unanimously agree that Pulse has never looked or sounded better, and only the absence of group co-founder Roger Waters prevents this from being the ultimate document of Pink Floyd in performance. (Even without Waters, it's easily one of the group's most impressive stage productions.) Gracefully directed with minimal intrusion by veteran music video and concert director David Mallet, and shot on video during Pink Floyd's two-week stint at London's Earls Court Exhibition Centre in October 1994, this 145-minute performance (from Floyd's Division Bell tour) is a sonic marvel to behold. Under a massive arch festooned with then-state-of-the-art laser, lighting, and projection systems, the 1987 incarnation of Pink Floyd (Gilmour, keyboardist Richard Wright, and drummer Nick Mason) and their stellar supporting band kicks off with "Shine on You Crazy Diamond" (a loving tribute to Floyd co-founder Syd Barrett), followed by four tracks from The Division Bell, two from 1987's A Momentary Lapse of Reason, "Another Brick in the Wall (Part 2)" from 1979's magnum opus The Wall, and leading into intermission with an absolutely stunning performance of "One of These Days," the timeless opening track from 1971's Meddle.

The centerpiece of Disc 2 is a near-perfect performance of 1974's Dark Side of the Moon in its entirety--reason enough to make this a must-have DVD for even the most casual Floyd admirers. And while no one will ever re-create the sheer magnificence of Clare Torry's original tour de force vocals on "The Great Gig in the Sky," it's safe to say that backup singers Sam Brown, Claudia Fontaine, and Durga McBroom deliver the next best thing, in addition to seamless contributions throughout the concert. After the closing heartbeat of "Eclipse," the concert ends with encore performances of "Wish You Were Here," "Comfortably Numb," and a no-holds-barred, pyrotechnically explosive rendition of The Wall's "Run Like Hell," all showcasing Gilmour's guitar mastery with frequent close-ups of his picking and fret-work as seen throughout the concert. (Like Gilmour, Mason and Wright were never dynamic onstage, and that's true here as well, but their technical precision is fully evident, and while guitarist Tim Renwick and saxophonist Dick Parry are each given moments to shine, bassist Guy Pratt is a worthy substitution for Waters, especially when vocally sparring with Gilmour on "Run Like Hell.")

With beautiful packaging, an 8-page booklet, and menu designs by long-time Floyd associate Storm Thorgerson, the DVDs offer an abundance of bonus features including "Bootlegging the Bootleggers," featuring surprisingly good-quality "boot" video performances of "What Do You Want From Me?," "On the Turning Away," "Poles Apart," and "Marooned." The surreal round-ratio screen films seen throughout the concert can all be viewed independently (still in round format, and several offered in both original and alternate versions). Music videos for "Learning to Fly" and "Take It Back" are included on Disc 1, along with "Tour Stuff" including maps, itineraries, and stage plans for the 1994 tour. "Say Goodbye to Life as We Know It" is a playful backstage video (mostly involving the production staff's ongoing quest for a good pint of beer), and after delivering a heartfelt introduction to Pink Floyd's 1996 induction into the Rock and Roll Hall of Fame (with Roger Waters and Syd Barrett acknowledged by Gilmour), Smashing Pumpkins leader Billy Corgan joins Gilmour and Wright for a moving acoustic performance of "Wish You Were Here" (directed at Waters, perhaps?). Additional features include album cover art, a photo gallery, and the concert-only audio choice between a 448kbps audio bitstream or a higher-quality 640kbps stream for higher-quality DVD players. The system set-up feature ensures that audiophiles will achieve optimum speaker performance in keeping with Pink Floyd's exacting technical standards. In tandem with the superior concert presentation, these features make Pulse one of the best--if not the best--music DVDs of 2006, guaranteed to satisfy Floyd fans for many years to come. --Jeff Shannon