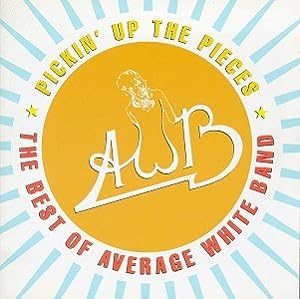 $7.97
As of 2021-10-06 14:10:48 UTC (more info)
Not Available - stock arriving soon
Buy Now from Amazon
Product prices and availability are accurate as of 2021-10-06 14:10:48 UTC and are subject to change. Any price and availability information displayed on http://www.amazon.com/ at the time of purchase will apply to the purchase of this product.
See All Product Reviews

The first complete anthology from Scotland's greatest R&B group! Includes all of their greatest Atlantic hits, choice LP cuts, and a pair of later Arista tracks.

If they'd never cut another track after their monster-grooving, No. 1 R&B instrumental, "Pick Up the Pieces," the Average White Band still would have earned an enduring place in the music pantheon--and the Irony Hall of Fame, the latter due to their improbable Scottish roots. After all, they were six soul-smitten musical journeymen hailing from quarters much nearer the Mull of Kintyre than Motown.

But lest anyone mistake that quirk for a marketing shuck, the funk-drenched love of early '70s black music driving every cut on this well-chosen anthology will set matters straight. Indeed, AWB proves imitation isn't just the sincerest form of flattery. In the hands of seasoned and talented musicians, it can be the sweetest form of inspiration, too. The members' early work in cover bands informs songs like the sweaty workout "Cut the Cake" and tuneful, Marvin Gaye-inspired "Queen of My Soul" and "A Love of Your Own." This album is convincing argument that soul has little to do with the color of one's skin. --Jerry McCulley