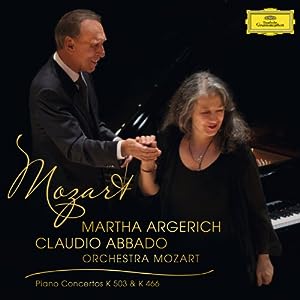 $9.61
As of 2022-09-19 05:38:39 UTC (more info)
Not Available - stock arriving soon
Buy Now from Amazon
Product prices and availability are accurate as of 2022-09-19 05:38:39 UTC and are subject to change. Any price and availability information displayed on http://www.amazon.com/ at the time of purchase will apply to the purchase of this product.
See All Product Reviews

The first new release for ten years from Martha Argerich and Claudio Abbado is their first ever album of concertos by Mozart.

The legendary pianist and conductor add the sublime music of Mozart to their unrivaled, multi award-winning DG discography of concertos by Tchaikovsky, Chopin, Ravel, Prokofiev, Beethoven and Liszt.

Both concertos were recorded with Claudio Abbado s Orchestra Mozart, at concert performances at the 2013 Lucerne Festival that had critics searching for new superlatives.

The album contrasts two very different works. Written in D minor, the key of the Queen Of the Night and the opening of Mozart s Requiem, the darkly dramatic No.20, K.466 has a stormy, operatic temperament that looks forward eighteen months to the premiere of Don Giovanni.

With its majestic and radiant opening and a march famously reminiscent of the Marseillaise, No.25 in C major, K.503 is the culmination of the twelve transcendent concertos Mozart wrote in Vienna between 1784 and 1786.

This release is Martha Argerich s first recording of solo concertos by Mozart on Deutsche Grammophon.

Masterworks of the 20th Century