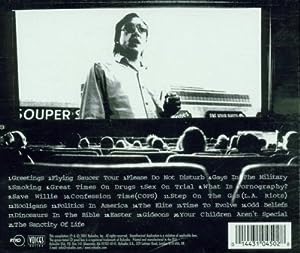 $5.00
As of 2022-10-01 15:09:41 UTC (more info)
Not Available - stock arriving soon
Buy Now from Amazon
Product prices and availability are accurate as of 2022-10-01 15:09:41 UTC and are subject to change. Any price and availability information displayed on http://www.amazon.com/ at the time of purchase will apply to the purchase of this product.
See All Product Reviews

Bill Hicks was the true heir to Lenny Bruce's legacy of confrontational comedy. While he worked primarily as a stand-up comedian, he was utterly unique in his era. Hicks's incisive observations on religion, society, and depression were darkly hilarious while subtly discomforting. Philosophy brings together some of Hicks's most disturbingly funny routines, compiled from his four CDs on Ryko. Intending to create the feel of one live concert, this collection succeeds quite admirably, thanks to the inclusion of pieces such as "Step on the Gas" (his take on the L.A. riots), "Gays in the Military" (self-explanatory), and "Politics in America." Any fan of Dennis Miller's rants should check the original, and pick up Philosophy: The Best of Bill Hicks. --Mike Johnson

You Are All Diseased

Been to the Mountaintop