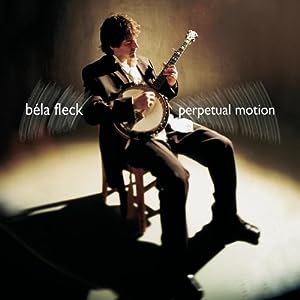 $38.95
As of 2021-07-29 14:14:37 UTC (more info)
Not Available - stock arriving soon
Buy Now from Amazon
Product prices and availability are accurate as of 2021-07-29 14:14:37 UTC and are subject to change. Any price and availability information displayed on http://www.amazon.com/ at the time of purchase will apply to the purchase of this product.
See All Product Reviews

Bela Fleck is one of the greatest five-string banjo players performing today. Beginning in the 1970s, he honed his lightning-fast chops performing bluegrass, then moved on to contemporary jazz and fusion sounds. With this album, he broadens his horizons once again by performing an entire program of classical music transcriptions. Reminiscent of classical guitar albums by John Williams (who makes a guest appearance here), the disc traverses a wide range of repertoire--from Chopin mazurkas to Bach's Two and Three Part Inventions. Throughout, Fleck displays a feathery touch on his banjo, and his instrument offers a pleasant, brassy tone with very little twang. The technique he displays on Perpetual Motion is astounding and a refreshing change of pace from the smooth grooves found on the banjoist's Flecktones recordings. The arrangements are generally minimalist and understated, but violinist Joshua Bell, bassist Edgar Meyer, mandolinist Chris Thile, and percussionist Evelyn Glennie join in on this groundbreaking disc. Bluegrass purists may be disappointed (this is a far cry from the free-spirited, folksy abandon found on Sony's Short Trip Home and Appalachian Journey CDs), but classical fans will be astounded by how perfectly natural Fleck's banjo sounds on these works. --Jason Verlinde