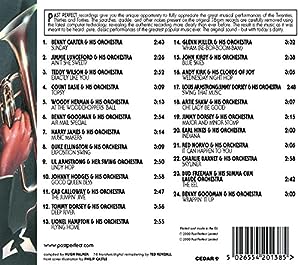 $15.00
As of 2020-02-28 20:35:18 UTC (more info)
Not Available - stock arriving soon
Buy Now from Amazon
Product prices and availability are accurate as of 2020-02-28 20:35:18 UTC and are subject to change. Any price and availability information displayed on http://www.amazon.com/ at the time of purchase will apply to the purchase of this product.
See All Product Reviews

For such a short and innocuous a word, 'Swing' packs quite a punch! You'll find the music style perfectly demonstrated on this album by many adept artists including Benny Carter, Woody Herman, Harry James, Jimmie Lunceford, Johnny Hodges, Duke Ellington.

Of course, to lovers of between-the-wars jazz, swing is far more than a portmanteau term for a musical style. But try to get a fan or indeed, a critic to define what they mean by swing and you tend to get a response which echoes Fats Waller's famous dictum: "If you have to ask, you'll never know. What better way to open our marvellous collection of re-mastered classics from the swing era than with At The Woodchopper's Ball? Woody Herman's greatest commercial and popular success features Woody's haunting blues clarinet and Neil Reid's punchy trombone with Saxie Mansfield on tenor-saxophone and trumpeter Steady Nelson. Benny Goodman makes two appearances in our compilation and that is only fitting, given his dominant position in the swing pantheon. Christened the 'King of Swing' by his promotions people, Goodman was an incisive instrumentalist, a clarinet virtuoso who had emerged from Chicago's Jewish ghetto, made good musically and formed an excellent big band. It was Lil Armstrong (nee Hardin) who set her husband Louis on the path to stardom with some astute promotional ideas. When he moved on and they divorced, Lil re-built her career as a bandleader and cut some tasty small-group records. Her tribute to the Lindy Hop (a dance craze pioneered at Harlem's Savoy Ballroom) spots her girlish vocal and some hot trumpet from the underrated Shirley Clay. Louis Armstrong so much liked Swing That Music that he used it as the title for his (ghosted) autobiography. He made two versions of this exciting piece in 1936, the first with his own band and this with the popular Jimmy Dorsey orchestra just three months later.

only $6.94
Available
View Add to Cart