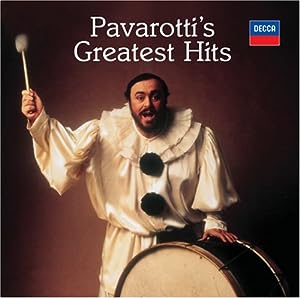 $11.45
As of 2022-11-30 09:42:15 UTC (more info)
Not Available - stock arriving soon
Buy Now from Amazon
Product prices and availability are accurate as of 2022-11-30 09:42:15 UTC and are subject to change. Any price and availability information displayed on http://www.amazon.com/ at the time of purchase will apply to the purchase of this product.
See All Product Reviews

Back by popular demand Pavarotti's Greatest Hits. First released as an LP in 1980 and then again in 1985, this is one of Pavarotti's best-selling albums. Instantly recognizable cover features classic photo of Luciano Pavarotti dressed as Pagliaccio from I pagliacci. Chock-full of his all-time greatest hits including Nessun dorma, La donna Ĺ  mobile, Vesti la giubba, Funiculi Funiculâ€¦ and more! Reissued in a slim-line jewel box for the first time and at a special 2 for 1price point. Celebrate the life and career of Luciano Pavarotti the world's most famous tenor and King of the High C's!

Here's a feast of great tenor singing. It's also a feast of thrills--one selection after another offers Pavarotti's remarkable, full-throated excitement in the music, whether the infectious spirit of his renditions of Neapolitan songs or the trumpet-like High C's he effortlessly tears off in the extended scene from Donizetti's La fille du regiment. Apparent throughout is Pavarotti's big-hearted emotional generosity that infuses this superb collection with an immediacy and communicative power that's impossible to resist. Of course, "Nessun dorma!" is here to lead off the set with the tenor's biggest hit, but his other Puccini arias are, if anything, even more compelling. Verdi is represented by such well-loved Pavarotti favorites as "La donna Ă¨ mobile" and "Questa o quella" from Rigoletto. He's as compelling in the "Ingemisco" from Verdi's Requiem, the voice blooming in the "Inter oves" section and then fined down to a gorgeous pianissimo. But there's not a single weak track on these discs, whose attractions are enhanced by full texts and translations. --Dan Davis