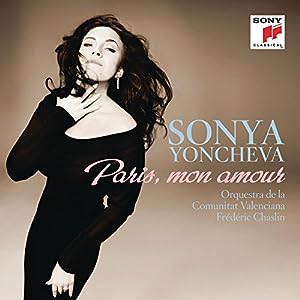 $10.45
As of 2022-11-27 14:35:15 UTC (more info)
Not Available - stock arriving soon
Buy Now from Amazon
Product prices and availability are accurate as of 2022-11-27 14:35:15 UTC and are subject to change. Any price and availability information displayed on http://www.amazon.com/ at the time of purchase will apply to the purchase of this product.
See All Product Reviews

The debut album from opera s rising soprano star appearing at The Metropolitan Opera in November and January!

"An artist on the brink of a major career."--New York Times

Sonya Yoncheva is one of today's fastest rising young opera stars. The Bulgarian soprano first gained international prominence in 2010 when she won first prize at Plácido Domingo's prestigious Operalia competition. In 2013, Sonya had her Met Opera debut as Gilda in "Rigoletto," garnering praise from audiences and critics alike, with the "New York Times" proclaiming, "She brought lovely stage presence and a sumptuous, penetrating voice to her performance. Ms. Yoncheva has such vocal glamour." Sonya has collaborated with many artists from the opera and pop world including Sting, Plácido Domingo, Elvis Costello and Jonas Kaufmann. For her debut album, "Paris, mon amour," Yoncheva focuses on repertoire from 19th-century Paris as an homage to the "Belle Époque" era. The album features arias from her career-defining roles as well as new additions to her repertoire which she will be performing at some of the world s greatest opera houses throughout the 2014/15 season. "Paris, mon amour" includes some of the most beautiful and well known arias from Paris operas like "La Traviata" and "La Bohème" along with lesser-known arias from the golden era of French opera music and French operettas by Messager and Lecocq. Sonya Yoncheva will be appearing at The Metropolitan Opera in New York City in November/December as Mimi in "La Bohème" and as Violetta in "La Traviata" in January 2015.