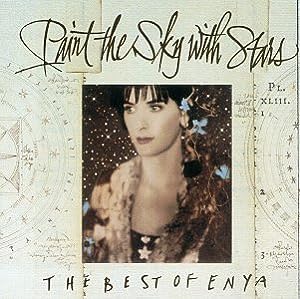 $14.99
As of 2022-06-30 11:31:56 UTC (more info)
Not Available - stock arriving soon
Buy Now from Amazon
Product prices and availability are accurate as of 2022-06-30 11:31:56 UTC and are subject to change. Any price and availability information displayed on http://www.amazon.com/ at the time of purchase will apply to the purchase of this product.
See All Product Reviews

New Age diva Enya first became widely known when her 1988 album Watermark sold 4 million copies and launched the single "Orinoco Flow." Her follow-up, Shepherd Moons, was even more successful, selling over 10 million copies despite its slightly lower grade of ethereal enchantment. In 1997 she released Paint the Sky with Stars, an assortment of her best work from these two early albums plus gems from 1995's The Memory of Trees and the soundtrack to the BBC series The Celts. The most melodic and atmospheric examples of Enya's lovely Celtic-flavored songwriting shine on this disc. Those unfamiliar with the former Clannad member will find charm in such sweet lullabies as "Marble Halls" and "China Roses" while delighting in the more energetic "Book of Days," "Storms in Africa," and "Caribbean Blue." Overall, an outstanding collection from an artist who gives New Age a good name. --Karen Karleski

A Day Without Rain by Reprise / Wea