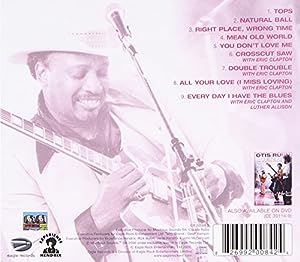 Southpaw guitarist Otis Rush made his debut in 1956 with a cover of Willie Dixon’s "I Can’t Quit You Baby", charting his first Top Ten R&B hit. Over the course of his 50-year career, Rush has established himself as one of the premiere bluesmen on the Chicago circuit.

Often credited with being one of the architects of the West side guitar style, Rush’s esteemed status as a prime Chicago innovator is eternally assured by his trademark sound. Blues fans have said that his combination of ringing, vibrato-enhanced guitar work with an intense vocal delivery is powerful enough to force the hair on the backs of their necks upwards in silent salute.

Otis Rush Live At Montreux 1986 features the Chicago blues legend at his spine-tingling best. For his first appearance at the Montreux Festival, Rush is joined on stage by fellow blues stars Eric Clapton and Luther Allison for a truly special show. The CD features nearly an hour-and-a-half of performances of Rush classics, including "All Your Love (I Miss Loving)", "Double Trouble" and many more.