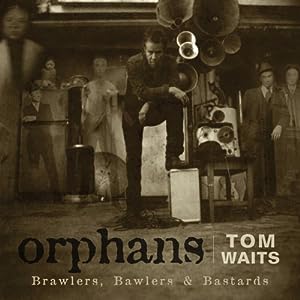 $29.95
As of 2021-11-30 08:30:50 UTC (more info)
Not Available - stock arriving soon
Buy Now from Amazon
Product prices and availability are accurate as of 2021-11-30 08:30:50 UTC and are subject to change. Any price and availability information displayed on http://www.amazon.com/ at the time of purchase will apply to the purchase of this product.
See All Product Reviews

"A lot of songs that fell behind the stove while making dinner" is how Tom Waits describes his new three-disc set, Orphans. The collection goes far beyond a simple career retrospective, with over 30 newly recorded songs - from Wait's own versions of songs he gave to other artist to some "things I recorded in the garage with the kids" - while over two thirds of the material has never been heard before now. In addition to the new work, Orphans features a number of tracks finding a home on a Waits album for the first time. The first disc, called Brawlers, is chock full of raucous blues and full-throated juke-joint stomp; second disc Bawlers contains Celtic and country ballads, waltzes, lullabies, piano and classic lyrical Wait's songs, while third disc Bastards is filled with experimental music, stories and jokes.

With these astounding 54 songs (plus two bonus tracks) Tom Waits has added a vital new work to his catalog. The title, Orphans, refers to the songs either being from a range of outside projects, various impulses, and whims, or simply not having found a place on the albums for which they were intended. While that scenario has constituted a stopgap measure for lesser artists, this set stands alongside Waits's finest work. He has shaped it into three separate discs, each one separately titled after the prevailing character of its tracks and playing with its own mood and dramatic arc. Brawlers favors raucousness and uptempo grinds and grooves, while Bawlers showcases balladry and the more overtly poetic. Bastards is a funhouse of angular characters, spiky anecdotes, shaggy dogs, and even a Kurt Weill cover. The set offers everything from the amped-up rockabilly hiccuping of "Lie to Me" to the breathtaking perfection of "Shiny Things," and from the outraged political reporting of "Road to Peace" to the closing-time lament of "Little Man." --David Greenberger

only $9.41
Not Available
View Add to Cart