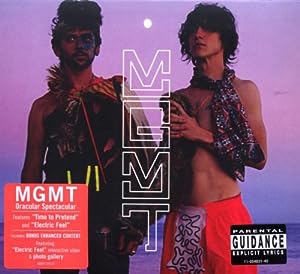 $5.32
As of 2023-01-24 15:12:36 UTC (more info)
Not Available - stock arriving soon
Buy Now from Amazon
Product prices and availability are accurate as of 2023-01-24 15:12:36 UTC and are subject to change. Any price and availability information displayed on http://www.amazon.com/ at the time of purchase will apply to the purchase of this product.
See All Product Reviews

Description of Oracular Spectacular from Sony

We are happy to stock the excellent Oracular Spectacular.

With so many available today, it is good to have a brand you can recognise. The Oracular Spectacular is certainly that and will be a superb acquisition.

For this reduced price, the Oracular Spectacular comes highly respected and is a regular choice amongst many people. Sony have included some great touches and this results in good value for money.

Forty years after the Summer of Love (and 30 years after the Summer of Hate), MGMT is celebrating the grand re-opening of the third eye of the world with Oracular Spectacular, an enigmatic and prophetic collection of hallucinatory sounds and hook-riddled Pop tones for the new millennium. MGMT is: Andrew Vanwyngarden and Ben Goldwasser, two psychic pilgrims whose paths first intersected in the green pastures of Wesleyan University in Middletown, Connecticut, circa 2002. The pair was drawn to the music of other duos and found themselves incorporating the implications of the hallucinatory power-twee of the Incredible String Band, the roaring subway minimalist Electronica of Suicide, the silky Pop-Soul of Hall & Oates, the pulsing narcotic trance of Spacemen 3, the avant-garde Industrial romanticism of Royal Trux and much more into the constantly evolving sounds of MGMT. Columbia. 2008.

The term Oracular Spectacular might not mean much, if anything, at all--it's essentially nonsensical--but that doesn't stop it feeling exactlyright. Here is a band that treats dizzy cross-eyed awe and a vast bounding sense of sonic weightlessness as their yardstick, jostling to surpass themselves on a track-by-track basis and aiming for the musical equivalent of performing somersaults in tye-dye t-shirts off the rings of Jupiter. MGMT seemingly submit this debut album as an application to acquire and even supersede The Flaming Lips' previously uncontested mantle as spiritual leaders of over-sized Technicolor psychedelic-indie with a soul, weird but not so weird that swelling crowds and even flirtations with the charts aren't a foregone conclusion. "Time to Pretend" opens and sets a tone for the record, producer David Fridmann (Flaming Lips, Mercury Rev) providing a familiar expanse for them to riff across with bull's-eye synths, massive drums and their twist on the template--retro 80s electro and abstract shapes, see Suicide and the Talking Heads for reference. "The Youth" is centred around a hypnotically looping refrain that recalls Pink Floyd and David Bowie, as interpreted by a mellow Secret Machines and the brilliant "Pieces of What" is Ryan Adams spinning through cosmos with classic Neil Young on his headphones. "Future Reflections" meanwhile stand on its hands on a line somewhere in-between XTC and Ween. Thrillingly eclectic, endlessly colourful and never predictable. It's all a bit ridiculous, but indeed spectacularly so. --James Berry