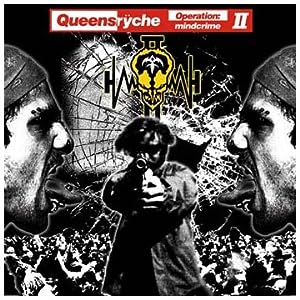 $14.10
As of 2023-02-05 20:10:55 UTC (more info)
Not Available - stock arriving soon
Buy Now from Amazon
Product prices and availability are accurate as of 2023-02-05 20:10:55 UTC and are subject to change. Any price and availability information displayed on http://www.amazon.com/ at the time of purchase will apply to the purchase of this product.
See All Product Reviews

We are delighted to present the famous Operation: Mindcrime II.

With so many on offer today, it is wise to have a make you can recognise. The Operation: Mindcrime II is certainly that and will be a perfect purchase.

For this great price, the Operation: Mindcrime II comes highly recommended and is always a regular choice amongst many people. Rhino have added some excellent touches and this equals great value for money.

The next chapter to the 1998 groundbreaking Grammy nominated concept album OPERATION: MINDCRIME. 17 track song cycle/story arc continues the drama of Nikki, Dr. X and Sister Mary in an intriguing plot with sociopolitical overtones and commentary. Features the hit "I'm American." [Note: This product is an authorized CD-R and is manufactured on demand]

Queensrÿche's sequel to the classic 1998 concept piece Operation: Mindcrime is not as good as the original. Mindcrime II lacks the sense of sweeping cinematic awe found on the original and although the quintet has managed to create an album that's equal to or above any studio outing it's done in recent years, there's nothing here that will bolster the band back to its former glory. A distinct lack of standout songs is perhaps the greatest problem. "Revolution Calling," "I Don't Believe In Love," and "Speak" became Queensrÿche classics not because they were part of the grand concept found on O:M, but because they could be drawn out and held up as fine examples of writing that probed the corrupt spirit of the age. O:M bled heavy truths from its deepest grooves.

Those familiar with the concept from the first album should note that this second installment focuses on protagonist Nikki and his desire to exact revenge on the corrupt Doctor X, making for a more insular narrative. That's a problem because one of the great thrills of the original Mindcrime was the scope of its scorn; here, the band never reaches beyond the confines of the world it created for this updated fantasy. The urgency that emanated from the earlier affair hasn't become muted, it has simply faded.

Yet, this new record's better than you might first believe and proves difficult to fully dismiss. In the 18 years since the original installment the band has become leaner, often more exacting, possessing a confidence that was less pronounced on earlier recordings. Scott Rockenfield's drumming has grown more interesting with time and the years have done little to lessen vocalist Geoff Tate's multi-octave expertise. The dual guitar attack of Michael Wilton and Mike Stone lacks the depth that the classic Wilton/Chris DeGarmo pairing had, but it proves enamoring on tracks such as "The Chase" (featuring a surprisingly pallid-sounding Ronnie James Dio), the swaggering "Junkie's Blues," and the near return-to-form "Fear City Slide."

No matter its strengths, O:M II ultimately reinforces the idea that while Queensrÿche's greatest moments may still lie ahead, the prospects of that being true become increasingly scant with each passing record. A decent enough stab at rekindling old glory that fails with admirable flair. --Jedd Beaudoin

only $6.37
Not Available
View Add to Cart