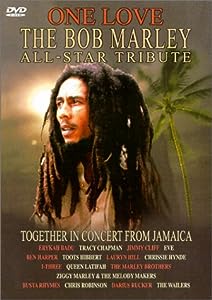 $19.99
As of 2021-04-15 18:26:15 UTC (more info)
Not Available - stock arriving soon
Buy Now from Amazon
Product prices and availability are accurate as of 2021-04-15 18:26:15 UTC and are subject to change. Any price and availability information displayed on http://www.amazon.com/ at the time of purchase will apply to the purchase of this product.
See All Product Reviews

One Love: The Bob Marley Tribute concert filmed amidst the beauty of Oracabessa Bay, Jamaica in December 1999, is a joyful celebration of Bob Marley's music and enduring legacy.

Conceived with DVD release in mind, this high-end, live video concert taped in Jamaica lives up to its title with a generous repertoire of Bob Marley songs performed by reverent pop, hip-hop, rock, and reggae veterans. Shot on a rainy night in December 1999, the home video version expands upon an inaugural TNT cable telecast with an additional hour of performances. The DVD edition adds a premium level of special features and exclusive content.

The music's the main thing, of course, and on that front One Love is uniformly respectful, orbiting around Marley's songs and infused with whiffs of his Rastafarian world view and reggae's broader Third World perspectives. Marley's family members serve as hosts and frequent collaborators, with a limber house band further reinforcing a coherent, communal element to the performances, and the titular all-stars immerse themselves in Marley's world. Lauryn Hill opens the concert with what is clearly one of its highest points, a joyful "Turn the Lights Down Low." Chrissie Hynde and Erykah Badu take turns duetting with Jimmy Cliff, and another reggae titan, Toots Hibbert, proves a perfect, ebullient fit with a current lineup of the Wailers. The celebrity choices include a conspicuous subset of American folk-rockers in Tracy Chapman, Ben Harper, and Hootie and the Blowfish's Darius Rucker, with Chapman the most convincing in a glowing version of "Three Little Birds."

Avid reggae fans may be mildly frustrated by the overall crossover thrust of this homage, which favors Yankee rap and hip-hop (via Busta Rhymes and Queen Latifah) instead of homegrown dancehall; it tantalizes us with glimpses of Marley's peers, like Cliff and Hibbert, while being largely occupied with sustaining its parade of non-reggae marquee names. For most viewers, though, the scope of the concert and the first-rate sonic finish will sustain the spell, an effect powerfully expanded on the superb DVD version. --Sam Sutherland