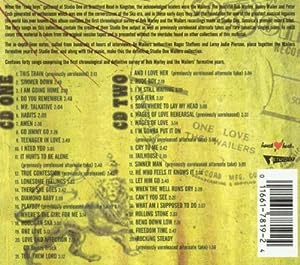 When the "rude boys" gathered at Studio One on Brentford Road in Kingston, the acknowledged leaders were the Wailers. The youthful Bob Marley, Bunny Wailer and Peter Tosh generated an enthusiasm which was one of the cornerstones of the Ska era, and in these early days they laid the foundation for one of the greatest musical legacies the world has ever known. This album contains the first chronological survey of Bob Marley and the Wailers recordings made at Studio One, Jamaica's premier record label. The forty songs on this collection contain the cream of their Studio One output as well as previously unreleased alternate takes and rare Jamaican singles sides. In most cases this material is taken from the original session tapes and is presented without the overdubs found on other collections of this material. The in-depth liner notes, culled from hundreds of hours of interviews, by Wailers authorities Roger Steffens and Leroy Jodie Pierson, piece together the Wailers formative years at Studio One, and along with the music, make this the definitive Studio One Wailers collection.

This two-CD compilation chronicles the urgent and early artistry of Peter Tosh, Bunny Wailer, and of course, Bob Marley. These historic sessions, recorded at the legendary Studio One in Kingston, showcase the embryonic stage of the Wailers band, backed by the Skatalites, The Mighty Vikings, Rita Marley, Junior Braithwaite, and many of Jamaica's finest musicians. Even on these old discs, Marley steals the show with his riveting and revolutionary vocals, as evidenced by the pulsing, prehistoric renditions of "Simmer Down," "Hooligan Ska," and his anthem "One Love." Several unreleased tracks and alternate takes--like Marley and company's riff on the Beatles' "And I Love Her," and a rare rehearsal track, "Wages of Love"--reveal their stylistic range and work ethic. To put it in evolutionary terms, this collection traces reggae's musical and philosophical DNA down to its R&B, doo-wop, Rastafarian, ska, and rock steady roots. --Eugene Holley, Jr.