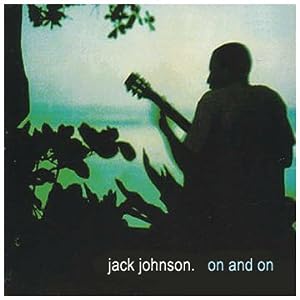 $4.00
As of 2023-01-26 20:26:10 UTC (more info)
Not Available - stock arriving soon
Buy Now from Amazon
Product prices and availability are accurate as of 2023-01-26 20:26:10 UTC and are subject to change. Any price and availability information displayed on http://www.amazon.com/ at the time of purchase will apply to the purchase of this product.
See All Product Reviews

2003 release, the sophomore album from the acclaimed singer, songwriter and surfer. Adam Topol played drums and percussion while Merlo Podlewski played bass. The album was recorded at The Mango Tree studios in Hawaii.

Jack Johnson has found himself a groove. Indeed, the Hawaiian surfing champion turned alternative pop-folk star really hasn't changed things one iota for his sophomore release. Fans of Brushfire Fairytales should be delighted with the results. The groove is a mellow one--most of the 16 tracks here are semi-acoustic--and that easy-going spirit filters into Johnson's lyrical philosophies. "What will be will be / And so it goes" he sings on "Times Like These," the opening track. Thankfully, Johnson is never too mellow, and there's a "Don't worry, be happy" vibe to most of his music. "The Horizon Has Been Defeated" even has a pseudo-reggae feel to it. Although classified as an alternative musician, the singer-songwriter's compositions owe much to past hits. "Traffic in the Sky" is reminiscent of Jim Croce's "Operator" and Looking Glass's one-hit-wonder, "Brandy." On the splendid "Taylor," Johnson sounds an awful lot like Donovan. And "By The Way" recalls the Lovin' Spoonful. -- Bill Holdship