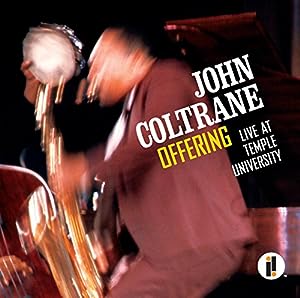 $21.48
As of 2022-09-27 21:32:26 UTC (more info)
Not Available - stock arriving soon
Buy Now from Amazon
Product prices and availability are accurate as of 2022-09-27 21:32:26 UTC and are subject to change. Any price and availability information displayed on http://www.amazon.com/ at the time of purchase will apply to the purchase of this product.
See All Product Reviews

Offering: Live At Temple University documents a legendary concert by John Coltrane at Temple University in his hometown, Philadelphia, Pennsylvania, on November 11, 1966, six weeks after his fortieth birthday and nine months before his untimely death.

Offering, available on September 23, 2014 in a deluxe format 2-CD digi-pak, incorporates a look that is contiguous with the graphic identity of Impulse! Records, Coltrane s exclusive label from 1961 until the end of his life. This is the first officially sanctioned release of an undiscovered, complete Coltrane performance since 2005. It captures Coltrane in exemplary form, navigating the language he had developed during the last phase of his musical path with passion and pellucid logic.

Operating at equivalent levels of invention and energy are three members of his working quintet of one year's standing his wife, Alice Coltrane, on piano; Pharoah Sanders on reeds and flute; and Rashied Ali on drums.

Offering is emblematic of the efflorescent energies and radical ideas that Coltrane himself had much to do with bringing forth during the seven years after 1960, when he left the employ of Miles Davis to pursue his vision as a leader. There are versions of Coltrane's 1960 hits Naima and My Favorite Things, a transformational reworking of the 1964 ballad Crescent, a spirit-raising rendering of Leo, which he had recorded on several previous occasions during 1966, and the hymnal Offering, which he would record on a February 15, 1967 studio session that Impulse! would release during the 90s as Spiritual Offering.

The immense life-force that animates the proceedings on this November 1966 evening in Philadelphia belies the declining state of Coltrane s health. It is still difficult to grasp and to accept that he was firmly in the grip of the liver cancer that would still his voice on July 17, 1967. As co-producer Ashley Kahn states in his liner notes, Coltrane was pointing the way forward for generations of players to come, pushing the music to exhilarating, spiritual heights that caught most by surprise. In 1966, that wasn't what jazz performances were about,not yet.

It's A Good Day