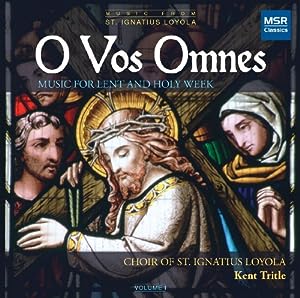 $12.99
As of 2022-11-30 01:46:03 UTC (more info)
Not Available - stock arriving soon
Buy Now from Amazon
Product prices and availability are accurate as of 2022-11-30 01:46:03 UTC and are subject to change. Any price and availability information displayed on http://www.amazon.com/ at the time of purchase will apply to the purchase of this product.
See All Product Reviews

The Choir of St. Ignatius Loyola, featured in the Sacred Music in a Sacred Space concert series at the Church of St. Ignatius Loyola, is comprised of New York's finest professional choral singers. Each member of the choir is a soloist in his or her own right in a variety of genres, including early music, opera, oratorio and contemporary repertoire. The core group of 19 members sings a demanding schedule of weekly parish worship services in a wide range of repertoire, with particular emphasis on new works, the sacred Renaissance repertoire and Gregorian chant. The Choir, heard in recordings on the MSR Classics and AMDG labels, was invited in 2006 to be the headline chorus at the Southwestern American Choral Directors Association convention in St. Louis, Missouri. In 2009, they performed in the opening festival of WNYC radio's Jerome L. Greene Performance Space on a concert bill with Rene Pape, John Zorn and Ute Lemper.

Kent Tritle is one of America's leading choral conductors. He is founder and Music Director of Sacred Music in a Sacred Space, the acclaimed concert series at St. Ignatius Loyola; Music Director of the Oratorio Society of New York and of Musica Sacra; Director of Choral Activities at the Manhattan School of Music; and a member of the graduate faculty of The Juilliard School. An acclaimed organ virtuoso, Tritle is also the organist of the New York Philharmonic and the American Symphony Orchestra. In his 22 years of presenting concerts on the Sacred Music in a Sacred Space series, Mr. Tritle has conducted the Choir and Orchestra of St. Ignatius Loyola in a broad repertoire of sacred works, from Renaissance masses and oratorio masterworks to premieres by notable living composers. As the Director of Music Ministries at St. Ignatius Loyola, Tritle oversees a program that annually produces more than 400 services with music. Since his appointment there in 1989, he has led the church's professional choir in critically acclaimed performances and developed the 50-voice volunteer Parish Community Choir. Kent Tritle has made more than a dozen recordings on the Telarc, AMDG, Epiphany, Gothic, VAI and MSR Classics labels, many of which have received high praise in Gramophone, American Record Guide and The Choral Journal. Mr. Tritle holds degrees from The Juilliard School in organ performance and choral conducting and has been on the Juilliard faculty since 1996. He is currently teaching choral conducting, and directing a graduate practicum on oratorio in collaboration with the school s Vocal Arts Department.