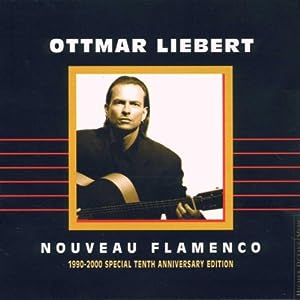 $13.31
As of 2021-10-09 18:43:45 UTC (more info)
Not Available - stock arriving soon
Buy Now from Amazon
Product prices and availability are accurate as of 2021-10-09 18:43:45 UTC and are subject to change. Any price and availability information displayed on http://www.amazon.com/ at the time of purchase will apply to the purchase of this product.
See All Product Reviews

The 10th Anniversary edition of Liebert's groundbreaking 1990 debut that brought his updated flamenco sound to the mainstream, featuring sparkling remixes of the original 12 tracks and 6 bonus tracks.

This is where it all began. Ten years ago, Ottmar Liebert brought flamenco music to the world with a new style of playing he dubbed, appropriately, nouveau flamenco. Ten years later, despite such adventurous CDs as Opium and The Hours Between Night and Day, Nouveau Flamenco remains his most popular CD. The reasons are obvious. Although Liebert is a technically gifted player, he lets the melodies of his flamenco-inspired tunes ring out over his own virtuosity. That's what makes songs like "Barcelona Nights" and "Sante Fe" so memorable. Nouveau Flamenco spawned countless imitators, some of them even very good, but this CD instantly reveals why Liebert has managed to be the top-of-the-brain name for modern flamenco music. On Nouveau Flamenco: 1990-2000, they've remixed everything, extended some tracks out a bit and brought in five additional pieces recorded at the same time as the original CD. The resequencing may throw off your memories of the original, and the mix here tends to be thinner and less reverberant, but one decade and millions of CD sales later, Nouveau Flamenco still lives up to its title. --John Diliberto

only $6.51
Not Available
View Add to Cart

Down to the Moon