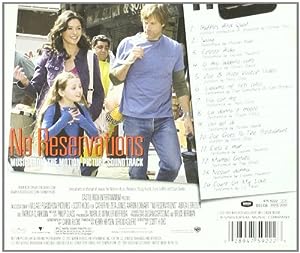 $12.10
As of 2020-09-17 05:42:26 UTC (more info)
Not Available - stock arriving soon
Buy Now from Amazon
Product prices and availability are accurate as of 2020-09-17 05:42:26 UTC and are subject to change. Any price and availability information displayed on http://www.amazon.com/ at the time of purchase will apply to the purchase of this product.
See All Product Reviews

It's pretty clear, based on its title, that this movie is set in a restaurant, and it's even clearer that it's an Italian restaurant when you look at the soundtrack: Its bread and butter (or pasta and olive oil) is arias from Puccini and Verdi. And big arias they are, too--so well-known that they are opera's versions of chartbusting pop hits: Verdi's "La donna è mobile" from Rigoletto (in a recent rendition by young tenor Joseph Calleja); Puccini's "O mio babbino caro" from Gianni Schicchi and "Un bel dì vedremo" from Madama Butterfly (both sung by Renata Tebaldi). And, of course, Pavarotti serves up a couple of hearty main courses with "Cielo e mar" and "Nessun dorma." The Italian mood is also reflected in contributions from Paolo Conte (his Gypsy-swing and bilingual "Via Con Me") and Michael Bublé's cover of the 1950s Latin pop hit "Sway" (which was popularized in the US by Dean Martin, born Dino Paul Crocetti--does that count as an Italian connection?). The album also includes three instrumental cues: Conrad Pope's "Truffles and Quail," and Philip Glass's low-key "Zoe and Kate Watch Video" and "Zoe Goes to the Restaurant." Liz Phair's "Count on My Love" inexplicably brings up the rear, but hey, it's a pretty great pop song (from Phair's underrated 2005 album Somebody's Miracle), so it's nice to see it get more exposure. --Elisabeth Vincentelli