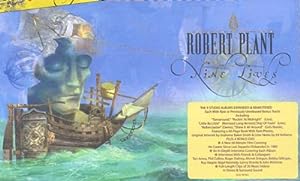 Legendary vocalist Robert Plant's extraordinary post-Led Zeppelin career is celebrated in this inspired 10-disc box set that encompasses his nine solo albums, expanded and remastered, and a bonus DVD with a one-hour documentary!

The title of this bonus-track-rich, 10-disc chronicle of Robert Plant's post-Led Zeppelin career refers not only to the number of solo albums the singer has released since Zep flamed out in 1980, but also his penchant for stubborn endurance and artistic reinvention in the face of time and the tides of fashion. While both Plant and Jimmy Page have never been able to fully escape the lengthy shadows of their original world-beating collaboration, it's the vocalist who's best--if irregularly--tempered, teased, and folded Zep's legacy into his mercurial solo career, with his 1982 debut Pictures at Eleven and 1988's Now & Zen being the most overt about it. More crucial to Plant's restless muse has been a willingness to move beyond Led Zeppelin, whether successfully casting a more structured set of songs in synth-drenched new wave veneer on "Principle of Moments" (supplemented here by the previously unreleased "Turnaround" and three live cuts, including an unlikely cover of Bob Marley's "Lively Up Yourself"), revisiting a wide swath of influential roots on the Honeydrippers EP and his first release with contemporary backing band Strange Sensation on 2002's Dreamland, or the symphonic ambitions of Manic Nirvana and multihued folk retrenchment of Fate of Nations. Enhanced by 26 bonus tracks of outtakes, demos, live cuts, and remixes, the nine albums anthologized here are also covered in an insightful essay by journalist Ed Vulliamy. The set's bonus DVD contains an hour-long retrospective hosted by Plant himself and features rare film clips and comments from many of his collaborators and admirers, as well as 20 career-spanning solo videos. --Jerry McCulley

only $8.40
Not Available
View Add to Cart