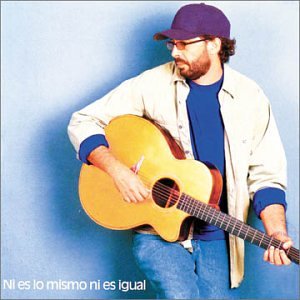 $18.99
As of 2021-11-26 23:58:01 UTC (more info)
Not Available - stock arriving soon
Buy Now from Amazon
Product prices and availability are accurate as of 2021-11-26 23:58:01 UTC and are subject to change. Any price and availability information displayed on http://www.amazon.com/ at the time of purchase will apply to the purchase of this product.
See All Product Reviews

Beginning in 1989 with his breakthrough album Ojala Que Llueva Café, Dominican singer-songwriter Juan Luis Guerra shook the Latin pop world by writing music that was successful both artistically and commercially. Without losing sight of the dancers on the dance floor or of hook-driven radio, Guerra reworked Dominican merengue, and later the romantic, bolero-like bachata, with sophisticated jazz harmonies, poetic lyrics, and top-shelf pop-style production. He even made some astute connections between modern Caribbean and West African pop. But in 1994 he disappeared from view. Ni Es lo Mismo ni Es Igual shows an artist finding his way back, looking for the markers he left behind but not wanting to simply re-create the past. He has a couple of potential hits in "Mi PC," a catchy merengue in which Guerra romances using the imagery and language of our computer world, and "El Primo," a witty, crisp merengue about a cousin who "knows Michael Jordan and is an actor / Breathes underwater and is a painter / Is a sociologist and pilot planes...." The highlight of the disc is "El Niagara en Bicicleta," a merengue-rap that deals with the tragicomic miseries of health care in the contemporary Dominican Republic and shows Guerra at his very best: a devastating social critic with a fine-tuned pop sensibility. No Es lo Mismo is solid rather than impressive. But still, solid, for Guerra, is already better than most anything else on the Latin music charts. --Fernando Gonzalez