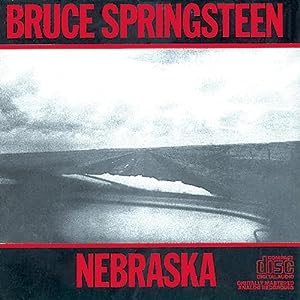 $7.94
As of 2021-04-22 12:22:52 UTC (more info)
Not Available - stock arriving soon
Buy Now from Amazon
Product prices and availability are accurate as of 2021-04-22 12:22:52 UTC and are subject to change. Any price and availability information displayed on http://www.amazon.com/ at the time of purchase will apply to the purchase of this product.
See All Product Reviews

1982 release, the first proper solo album from the singer, songwriter and leader of The E-Street Band. Sparsely-recorded on a cassette-tape Portastudio, the tracks on Nebraska were originally intended as demos of songs to be recorded with the E Street Band. However, Springsteen ultimately decided to release the demos themselves.

Hot on the heels of The River, his commercial breakthrough, Springsteen's decision to release the stark, demo-quality Nebraska seems downright perverse. But the genius of the album is unmistakable--with just an acoustic guitar and his howling harmonica to back him, Springsteen tells the stories of characters walking on both sides of the law, some of them directly on the line in between. The effect is that of a powerful series of black-and-white photographs--the details are bleak in and of themselves, but they ignite the imagination in ways that are more satisfying than full-color shots would be. "Mansion on the Hill," "Highway Patrolman," "Atlantic City," and the frightening "Nebraska" are among the most sharply rendered and memorable works of Springsteen's career. --Daniel Durchholz