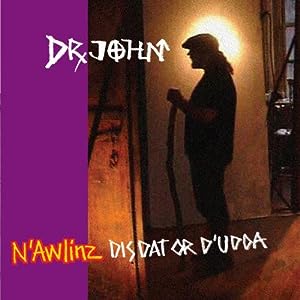 $11.69
As of 2022-06-24 01:46:13 UTC (more info)
Not Available - stock arriving soon
Buy Now from Amazon
Product prices and availability are accurate as of 2022-06-24 01:46:13 UTC and are subject to change. Any price and availability information displayed on http://www.amazon.com/ at the time of purchase will apply to the purchase of this product.
See All Product Reviews

Mac Rebennack took his stage name from the voodoo healer Dr. John and became a '70s pop star by recasting New Orleans's myth and music in his own psychedelic image. At 63, he's again revamped the Crescent City sound, minus the acid-trip trappings, for his best album in decades. With its string, horn, and Afro-Latin percussion sections and its slate of re-imagined classics, N'Awlinz is a masterful summation of Dr. John's abilities as a leader and performer. Guests such as Willie Nelson, B.B. King, and Mavis Staples, plus a roster of Louisiana luminaries including Randy Newman, Nicholas Payton, Snooks Eaglin, Gatemouth Brown, Dave Bartholomew, and Earl Palmer, all make winning contributions. In Dr. John's grasp, "When the Saints Come Marching In" becomes a stately waltz that twines his elegant piano and gravel throat with Staples's rich, red-clay gospel singing. And he honors the spirit of standards like "Stackalee" and "St. James Infirmary" while spinning his own lyrics and melodies into them. "Time Marches On" (with King, Nelson, and the Dirty Dozen Brass Band), "Life is a One Way Ticket," and several spirituals contemplate mortality, but never interrupt the graceful, upbeat flow of this late-career opus. --Ted Drozdowski

only $8.20
Not Available
View Add to Cart

In The Right Place *Created for WMI Comp...

Nightmares...And Other Tales From The Vi...