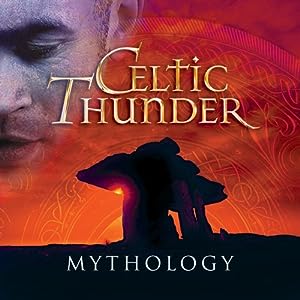 $11.34
As of 2021-09-18 13:37:55 UTC (more info)
Not Available - stock arriving soon
Buy Now from Amazon
Product prices and availability are accurate as of 2021-09-18 13:37:55 UTC and are subject to change. Any price and availability information displayed on http://www.amazon.com/ at the time of purchase will apply to the purchase of this product.
See All Product Reviews

"Voices call from the old days, Voices tell from the past, Ancient laws and ancient old ways to recast." (Voices opening number from Mythology)

Mythology is the latest show from Celtic Thunder and the show's 9th special for Public Television. Filmed on location at the Helix Theater in Dublin (where they filmed their debut show in 2007), it's fitting that Celtic Thunder have chosen to return to their roots in order to film this musical odyssey back to the heart of the Celt. The opening number for Mythology is an original piece called Voices written expressly as an opener for the new show. Voices, quoted above, is collaboration between Celtic Thunder Musical Director David Munro and world-renowned composer Brendan Graham, who also composed the international hit "You Raise Me Up."

The core theme of Mythology is found in the opening number "Voices call from the old days, Voices tell from the past, Ancient laws and ancient old ways to recast." It's the story of the Celts in Ireland, their legends, their history and their stories. It's the lifeblood of modern day Ireland and it's influences from our Celtic past, which are still carried in each one of us as part of who we are and where we come from.

The set of Mythology is big; it's dramatic and imposing. The new and the old combine. Modern catalyst images are projected onto ancient standing stones, a giant Celtic cross takes center stage and the tempo of the music is strongly echoed in the theatrical and moody lighting. Mythology is by far Celtic Thunder's most impressive production to date, bar none.

The road to Mythology began in 2007 when Sharon Browne, the Celtic Thunder's creator and producer, set out to produce a show with real Celts performing an eclectic mix of songs ranging from the traditional to international hits and some original pieces along the way. That show and each subsequent Celtic Thunder show have raised the bar for Irish music and theatrical productions worldwide. Mythology has raised that bar yet again, even by Celtic Thunder standards. It is without down their most extravagant and spectacular show ever and by far the biggest undertaking of producer Sharon Browne's and Musical Director David Munro's careers to date.

Mythology comprises of six diverse performers who are each a powerhouse in both their solo and ensemble songs, backed of course by the dynamic Celtic Thunder Band. And while Celtic Thunder shows are known for the use of dramatic combinations of lighting, choreography and set design, Peter Barnes, the Set & Lighting Director for Mythology has upped the ante and has created a stage that surpasses anything Celtic Thunder has done heretofore.

Celtic Thunder have now toured the US and Canada, coast to coast, six times, performing at over 500 shows and in doing so have sold well in excess of half-a-million concert tickets.

only $6.16
Not Available
View Add to Cart

Paradise Has No Border