Musical Mojo Of Dr. John: A Celebration of Mac & His Music [2 CD] 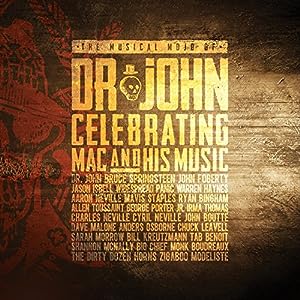 Musical Mojo Of Dr. John: A Celebration of Mac & His Music [2 CD]

$10.56
As of 2020-08-08 17:07:50 UTC (more info)
Not Available - stock arriving soon
Buy Now from Amazon
Product prices and availability are accurate as of 2020-08-08 17:07:50 UTC and are subject to change. Any price and availability information displayed on http://www.amazon.com/ at the time of purchase will apply to the purchase of this product.
See All Product Reviews

The Musical Mojo of Dr. John 2 disc live recording captures a star-studded concert at New Orleans' Saenger Theatre, with Dr. John joined by a stunningly diverse assortment of notable guest artists, who perform 22 songs written, recorded and/or popularized by Dr. John during his prolific six-decade career, honoring his large and still-growing musical legacy.
The performers include Bruce Springsteen, who duets with Dr. John on the 1973 smash 'Right Place Wrong Time'; Jason Isbell, who delivers a heartfelt 'Blow Wind Blow'; John Fogerty, who performs the raucous Crescent City anthem 'New Orleans'; Mavis Staples, who brings gospel fervor to 'Lay My Burden Down'; Widespread Panic, who lend musical muscle to 'Familiar Reality'; and Ryan Bingham, who delivers a haunting 'Back by the River.'

Welcome To My Blues