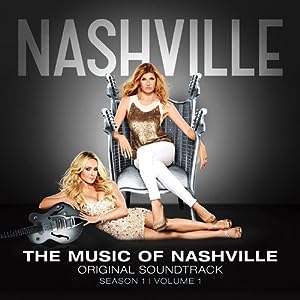 $6.90
As of 2021-12-04 05:42:44 UTC (more info)
Not Available - stock arriving soon
Buy Now from Amazon
Product prices and availability are accurate as of 2021-12-04 05:42:44 UTC and are subject to change. Any price and availability information displayed on http://www.amazon.com/ at the time of purchase will apply to the purchase of this product.
See All Product Reviews

There is plenty to like about the first season of ABC's prime-time drama Nashville. The centerpiece, of course, is music. Actors Connie Britton (Rayna James), Hayden Panettiere (Juliette Barnes), Charles Esten (Deacon Clayborne), Clare Bowen (Scarlett O'Connor), Sam Palladino (Gunnar), and others actually perform the songs in the series backed by a host of ace studio players. T Bone Burnett is Nashville's music producer, and he's enlisted some of Music City's finest songwriters and the help of longtime friend Buddy Miller to co-produce (and perform on) most of the songs here.

The end result is a collection that provides a compelling argument that contemporary country music doesn't need to divorce itself from its history. It also makes a solid case for the radio accessibility of Americana and alt-country. Most of the music here -- Britton's elegant ''Buried Under,'' her duet with Panettiere on ''Wrong Song,'' and Panettiere's duet with Esten on ''Undermine'' use contemporary country tropes, without sacrificing soul for production sheen. In other words, it's both the singer and the song that hook a listener.

Virtually all of these instruments (especially drums and percussion) sound warm and natural, and serve to accent and support the vocals rather than overwhelm them. Panettiere's ''Love Like Mine,'' and her performance on the radio mix of ''Telescope'' would likely chart if they were released as singles. Americana numbers such as the Civil Wars' ''If I Didn't Know Better,'' performed by Palladino and Bowen, scored big on YouTube and prompted numerous Twitter conversations. So too the rootsy version of ''Telescope,'' performed by Lennon & Maisy Stella (aged nine and twelve, who play Britton's daughters on the series), with only an acoustic guitar for accompaniment. ''Twist of Barbwire,'' performed by Jonathan Jackson (Avery), is a tom-tom and whammy bar-driven rocker with just enough twang to make it walk between rockabilly and alt country. It probably doesn't hurt that it was written by Elvis Costello. Esten's ''Sideshow'' is a lovely ballad that walks dead center between Americana and contemporary country.

Usually, soundtracks for television shows are a mixed bag at best. The Music of Nashville is a very notable exception.