Music Of Georges I. Gurdjieff 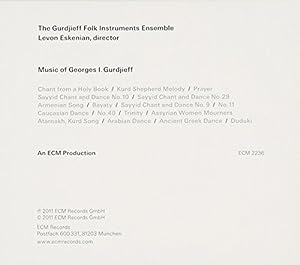 Music Of Georges I. Gurdjieff

$14.05
As of 2022-07-27 12:17:56 UTC (more info)
Not Available - stock arriving soon
Buy Now from Amazon
Product prices and availability are accurate as of 2022-07-27 12:17:56 UTC and are subject to change. Any price and availability information displayed on http://www.amazon.com/ at the time of purchase will apply to the purchase of this product.
See All Product Reviews

ECM has had a long involvement with Gurdieff's compositions, starting with Keith Jarrett's recording in 1980 of the "Sacred Hymns", which brought about an international revival of interest in the music. Now this fascinating project by Levon Eskenian and his ensemble returns the Gurdjieff music to its inspirational sources.

To date Gurdjieff's compositions have been studied, in the West, largely via the piano transcriptions of his gifted amanuensis, the Russian composer Thomas de Hartmann. Now, however, Levon Eskenian goes beyond the printed notes to look at the musical traditions that Gurdjieff encountered during his travels, and rearranges the compositions from this perspective. This revelatory recording gives the listener the experience of hearing Gurdjieff in full colour and in close-up, as it were Gurdjieff from the source, rather than filtered through western classical interpretation, Gurdjieff with the instruments of the East. Eskenian draws attention to the roots of the pieces in folk and spiritual music, aided by Armenia's leading practitioners of traditional music, with whom he founded the Gurdjieff Folk Instruments Ensemble in 2008.

G. I. Gurdjieff, philosopher, spiritual leader, author and composer, was born in Armenia, but his work and particularly his music is just being rediscovered there. Performances of his music, considered a double threat because of its progressive and religious implications, were discouraged during the Soviet years.

Levon Eskenian turned his attention to Gurdjieff while studying at Yerevan's Komitas Consevatory. An encounter with ECM's "Chants, Hymns and Dances" recording - the 2003 album with new Gurdjieff arrangements by Anja Lechner and Vassilis Tsabropoulos - also prompted him to think deeply about Gurdjieff's sources, as he recognized a number of the tunes as clearly related to folk songs or sacred songs of the region, to songs he'd known since childhood. Eskenian's liner notes to the present recording trace each of the pieces to specific geographical points of origin and/or inspiration:

"Taking many facts into consideration, and seeking an objective understanding of Gurdjieff's music, I found it necessary to choose from Gurdjieff's repertoire pieces that have roots in Armenian, Greek, Arabic, Kurdish, Assyrian and Caucasian folk and spiritual music, and through a study of the instrumentation and performance practices of the musical traditions of the region, I have aimed to create `ethnographically authentic' arrangements of Gurdjieff's music for Eastern Instruments."

The logical consequence of this work was the founding of the Gurdjieff Folk Instruments Ensemble in 2008. The group gave its first concerts in Gyumri (Alexandropol), Gurdjieff's birthplace, and recorded its debut album in Yerevan in the winter of 2008. The recording was mastered by ECM in Munich in 2011