Music From The Motion Picture Everybody Wants Some!! 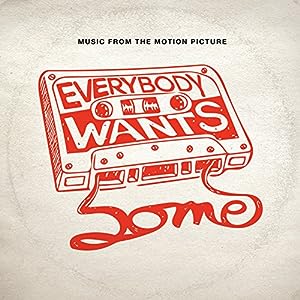 Music From The Motion Picture Everybody Wants Some!!

$10.99
As of 2020-09-20 18:02:18 UTC (more info)
Not Available - stock arriving soon
Buy Now from Amazon
Product prices and availability are accurate as of 2020-09-20 18:02:18 UTC and are subject to change. Any price and availability information displayed on http://www.amazon.com/ at the time of purchase will apply to the purchase of this product.
See All Product Reviews

The official soundtrack curated by the film's director Richard Linklater, featuring classic songs from Van Halen, The Cars, The Knack, and many more.
Quote from Linklater: "The Everybody Wants Some soundtrack tries to capture the amazing diversity of what was on the table musically at that time. So many artists were at the top of their game, and it seemed like a lot of popular genres were viable. Metal and R&B were as big as ever, disco was still hanging in there (although it would be ‘dead' within a year or so), and, thanks to the movie Urban Cowboy, country was suddenly cool in places it hadn't been before. Even more exciting was the immediacy of punk and new wave, and the first examples of this thing you'd eventually know as hip-hop. Over the years some of this has been parodied and made to look ridiculous, but this movie is asking you to experience it as if for the first time - from those opening drum beats of ‘My Sharona' to the utter newness of ‘Rapper's Delight.'"

The Perks of Being a Wallflower