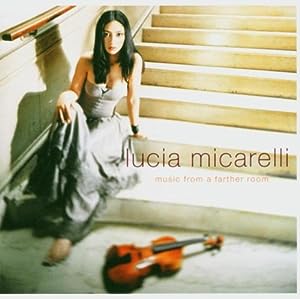 $13.98
As of 2021-12-04 05:40:17 UTC (more info)
Not Available - stock arriving soon
Buy Now from Amazon
Product prices and availability are accurate as of 2021-12-04 05:40:17 UTC and are subject to change. Any price and availability information displayed on http://www.amazon.com/ at the time of purchase will apply to the purchase of this product.
See All Product Reviews

For anyone who has attended Josh Groban's phenomenal live show, you will have undoubtedly had the pleasure of seeing and hearing his lead violinist, Lucia Micarelli. Lucia came to Josh's tour after appearing with the Trans- Siberian Orchestra playing arenas across the U.S. in 2003. With the close of the second leg of Josh's tour, Lucia is recording her debut album in New York and London with producer Paul Schwartz. Musical selections will range from the works of composers Ravel and Ennio Morricone to David Bowie.

Josh Groban fans who caught the singer's 2004 Closer tour would no doubt take note of Lucia Micarelli, who was the violinist and concertmaster for Groban. Like her boss, who also is executive producer of Music From A Farther Room, Micarelli is a young, attractive, and talented player who has the classical training, but who is also enchanted with pop music. Also like her boss, her strain of classical crossover works thanks to tasteful accompaniment, in this case from arranger/composer Paul Schwartz. The smartly chosen program of material comes from such varied catalogs as David Bowie and Rogers and Hart. Micarelli's playing is emotional without being overreaching, assertive when called upon, and nuanced. When she does go over-the-top pop on Queen's "Bohemian Rhapsody," it's brief but fun; when she navigates Piazzollas "Oblivion" she draws upon the song's passion more than its technical requisites. This is a debut with likeable pizzazz, coming in a genre not often enough known for it. -- Tad Hendrickson